Carlena Britch is a dancer and actress who has seen her dreams become reality, all from a single audition tape!

Born in Canada and now residing in L.A., Britch was chosen by Justin Bieber in April of 2012 to become a backup dancer with him on the “Believe” tour. That is when everything changed.

“It was quite an experience. I will never forget that phone call. I was sitting in a bowling alley and it was an exhilarating thrill,” said Britch. “Instantly I started crying. It was a great feeling.” At the initial audition, Carlena had been asked “Why do you want to be apart of the Believe Tour?” Britch responded, “I believe in a higher power than what we believe in ourselves. Being truthful and believing in yourself is something I’ve always done.”

Carlena made the cut, beating out over 1,000 people, and went on to tour for two years,  performing the same show 157 times.  Press Pass LA asked Britch how she dealt with the homesickness of not being around her friends and family. “The good thing about our tour was that it made many stops, including stops in Canada where I got to see family and friends,” said Britch. “The hardest tour leg was our Europe one, as it went for three and a half months without a break.” All of the hard work, dedication, and preparation Britch put forth for these types of opportunities is extraordinary. When you commit to something you love to do, that one thing becomes apart of your everyday routine. “I have been dancing for 12 years. Every journey I danced in, was a preparation for that moment. Being on tour and understanding the lifestyle it comes with is something beyond dance itself,” said Britch.

Once she began touring with Bieber, other opportunities started rolling in. She has now added to her resume dancing with Chris Brown, Pharrell, Prince, Usher and more, as well as appearing in several music videos. She was recently featured in Usher’s new video, “Good Kisser”. Over the summer, Britch had a blast dancing in Prince’s video for his single, “Breakfast Can Wait” while rocking his personal attire . “I did some work with Prince over the summer. It was great! I actually believe he was my father in the past life,” said Britch, jokingly.

This is not the end for Carlena Britch. PressPassLA was able to ask Britch who she could see herself dancing with in the future. And of course she said one of ours favs! “Justin Timberlake! It would be really cool to work with him. I would also like to build further consistency with the artists that I’m working with now,” said Britch.

We wondered if it is ever distracting working with talented handsome men like her pick JT, as Britch is both an amazing dancer and beautiful woman and dance is such an intimate art form. She said, “Dancers are very flirtatious. Flirting always happens when guys and girls are involved, but I’ve got my focus in one direction. I like to keep it professional. We all love each other though!,” said Britch. 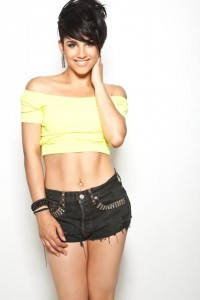 Carlena Britch is just now settling down in L.A. and has so many new beginnings coming her way.