On June 17th- you all better be ready to Netflix and chill! Even if Kate Mulgrew “Galina “Red” Reznikov” isn’t down with what that exactly means, the cast of “Orange Is The New Black” has her back. The unknown or not knowing was a reoccurring theme in tonight’s PaleyFest panel discussion about the much anticipated Season 4.

These actors do not know what is to come and usually with very little preparation. Taryn Manning, who plays “Tiffany “Pennsatucky” Doggett” explained that very much like their characters would be in real life- they are “thrown into this world as we would be.”

Much credit to Jenji Kohan and the writing team was given. The actors laughed agreeing they all felt “methodically stripped of all ego because the writing is so great.” By letting go, accepting the unknowns and taking risks – it has benefited their characters. Their hard work ethics coupled with the fact that they all genuinely really like each other leads to an unusually compatible set. 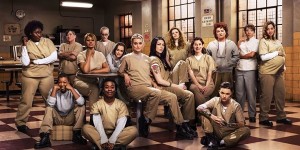 Selenis Leyva, who plays “Gloria Mendoza” called the set “heavenly” recalling in her past Hollywood days – “you could never be “enough”- alas this show and her cast-mates are also know as her “band of misfits and “we are enough.”

Sharing the pride of OITNB for shedding light on topics such as transgender – Leyva touched her heart and spoke on behalf of her own sister who is transgender and how the storylines in OITNB make her proud to be on this type of show where the writers are a “real gift.”

No secrets were spilled – so you’ll just have to watch! One thing is clear, these actors have some serious chemistry and they aren’t going anywhere! Season 4 is said to be VERY good.