We attended Day 4 of the festival which featured the West Coast premiere of William H. Macy’s directorial debut Rudderless. Macy was also honored with the Festival’s Stanley Kramer Social Artist Award. We had the opportunity to speak with him about this award, his Showtime hit series Shameless, and what it was like being behind the camera for Rudderless.

Macy’s Shameless co-star Emmy Rossum was also there to accept the Avalon Award, named after Catalina’s city of Avalon, and spoke with us about her upcoming film opposite Hilary Swank titled You’re Not You which deals with the topic of ALS (recently in the news for the ALS Ice-Bucket Challenge).

Acting legend Andy Garcia was also honored that evening with the fest’s Ronald Reagan Great Communicator award and chatted with us about his long-standing career and the special place The Godfather films will always have in his heart.  Finally,  producer- writer Roman Coppola received the Vanguard award. 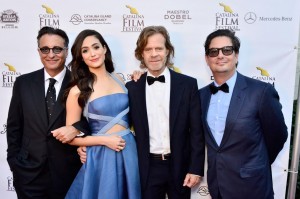 Watch the video for all the red carpets highlights!