On Sunday evening, Press Pass LA had the honor of attending the opening night of The Hollywood Haunted Hayride in Griffith park, and it did not disappoint! 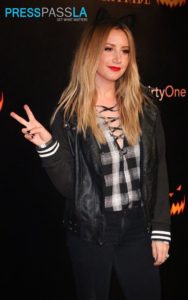 Additionally, the cast of Ouija: Origin of Evil, showed up to promote the film and to show support for the Ouija maze, based on the new film. We spoke with one of the stars of the new scary flick, Annalise Basso. While Basso tried to not let the actual Ouija board freak her out during filming, what made the whole experience terrifyingly real was the makeup! “Next thing you know, your fellow actors come out of the makeup room with their mouths sown shut, it was terrifying.” When asked if after going through the whole experience, if things like the Hollywood Haunted Hayride scared her less, her response was “Yes, definitely! I am a really sensitive person, and if I didn’t do scary movies I would definitely have to bring an extra pair of pants to these kind of things!” 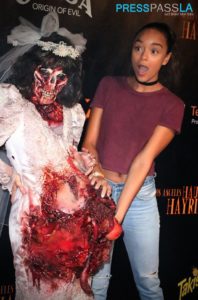 We also got the chance to chat with Shenae Grimes, who is a huge horror movie buff. We decided to ask her the ultimate Halloween question for actors, “If you could go back in time and be in any horror film, what would it be?” Grimes’ response was, “Halloween, all day long, love those movies. But the OG movies, of course.” Mid-conversation, her adorable husband of over a year came up behind her to give her a good scare, and it worked! We asked her what’s new in her life besides marriage, she told us that she has launched a new blog and is acting again, so we will be seeing much more of her soon!

While some celebs opted out of walking down the black carpet, it was still a blast to see them going through the terrifying mazes and that epic hayride. Speaking of the hayride, we can confidently say it was even better than last year. This year, instead of staying in the hay filled wagon for the entirety of the attraction, everyone actually got out and walked through the creepy woods in Griffith Park. Actors, mainly dressed as clowns, chased us through the park while creepy music played, it was an absolute blast. 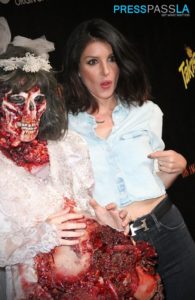 The entire of experience of The Hollywood Haunted Hayride is by far one of the best in Los Angeles. In addition to the hayride and the Ouija maze, there were also Trick Or Treat and Purgatory mazes that had us absolutely terrified, in the best way possible.

Make sure you check out the must see Halloween attraction of the season!