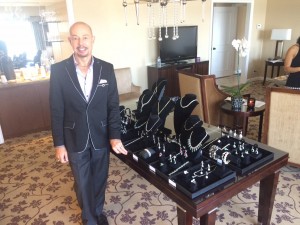 Every season, O’ Connor curates a selection of one of a kind jewelry pieces from world-renowned designers for celebrities to borrow for the red carpet. From 80-carat diamond necklaces to natural twig form earrings to rare Zambian emerald rings, O’Connor accessorizes Hollywood’s leading television stars with the highest, most exquisite jewelry. 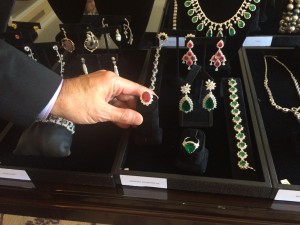 His first choice was a diamond surrounded Ruby Red ring by The Shaftel Company. The diamond surrounded ruby stone maintained its classic appeal but with a modern edge, a style O’Connor believes is signature to the brand. The ‘North South’ orientation of the ring is designed to have a wearable look, but also to give a leaner silhouette to the wearer’s hand. “This is one of the top three because I think with a lot of colors that we are seeing come in especially with the new pan tone colors. For example, the rose courts its going to be a lot of very pale looks, so the red ruby will be a nice contrast and a focal point,” says O’Connor. “This is going to be a major look.”

With over 76 carats of diamonds and appraising at nearly 1 million dollars, O’Connor’s second choice is a classic Emmy statement. O’Connor believes people should be more aware of where their diamonds are produced to ensure high quality and conflict free stones. “A lot of people today want to be more socially responsible and ecologically friendly pure grown diamonds actually grown their diamonds above the ground. There’s no mining involved so people can be sure that there diamonds are conflict free and their diamonds are guaranteed certified. All real diamonds, really beautiful.”

Christopher is originally an engineer who came into the jewelry industry. When it comes to diamond cutting its’ all about engineering the stone for maximum light performance and Christopher has a Patton cut. What he does is called the Lamour by Chris cut, which actually helps a diamond, it doesn’t has as many cuts in it and it maximizes light with less faucets you don’t get a lot of that breakdown of color instead you get a beautiful gorgeous breakdown of color but you get these beautiful gorgeous white flashes of light that people love from there diamonds and it makes the diamond appear brighter and whiter and because it doesn’t have a deep pavilion on it, saves weight. This Lamour by Chris cut looks 40-45 percent larger than a similar diamond. 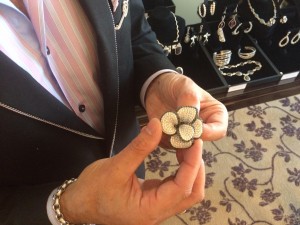 The last design, Davani by A&D Gem Pin, is O’Connor’s favorite. O’Connor believes the versatility and economic advantages provided by the pin is unmatched by any other type of jewelry. “A pin doesn’t have to be worn on a lapel only it can be worn on a hat, a belt, worn to accentuate a focal point in a gown, it can be worn on a chain to create a pendant, worn in your hair so there’s so many great things you can do with a pin. We are seeing a lot of men on the red carpet now starting to adopt what I call the man broach. Terrance Howard started it a couple years ago, Usher has certainly caught onto the trend, and we are seeing a lot of men really gravitate towards that. For the Oscars this year, I had three requests for men broaches for them to wear on their lapel and I am a big advocate of that.” Says O’Connor.