CELEBS TAKE TO TWITTER TO CRITICIZE ARIANA GRANDE IN DONUTGATE

Singer Ariana Grande has been in the hot seat for her recent actions in a California donut shop. Video Footage of Grande went viral and showed her licking donuts she did not purchase and yelling that she hated America.

Arianna Grande posted a lengthy apology and explanation behind her actions including references to obesity in America. Yet, everyone has still not forgiven Grande.

Former Parks and Reaction star Rob Lowe took to twitter to criticize the singer’s apology. Lowe did not find her apology believable and called it “lame”. Actress Susan Sarandon’s reaction on twitter was rather lighter hearted. Sarandon tweeted “Today, lick a doughnut in solidarity with @ArianaGrande. A sweet, talented, true American.” 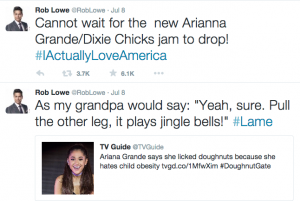 While the people have spoken, police told the Los Angeles Times they don’t believe a crime was committed, so Grande may not be investigated. For now Grande is safe from a legal investigation, but her apology may not win everyone over.

As for us, we’re just happy we didn’t buy one of those licked donuts or get pulled over for tweeting in the car!