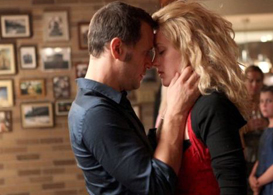 Modern film has become the true philosopher of our age. Many, like the recent Cloud Atlas, try and answer mankind’s big questions on an epic scale. Jean Marc Vallee’s Café de Flore is of the same ilk although it takes a much different approach. Unlike Cloud Atlas where the narrative structure is clear Café does not show the audience its cards until the very end. While this can be frustrating it is also quite ingenious.

On its surface the film follows two separate storylines: that of a modern day, successful Parisian family man (Kevin Parent) dealing with divorce and a mother (Vanessa Paradis) and her Down Syndrome son (Marin Gerrier) in the 1960s. At first there is no clear connection between the two but as the stories unfold you find that what you are watching is actually a much larger cosmic play. Modern cinema seems fascinated with connecting the lives of strangers toward a grander scheme. A similar approach was tried earlier this year with 360 but without the same results. While that movie seemed like a gimmick, Café moves along with a real purpose.

One must applaud the film for its low-tech approach to the rather cosmic subject matters of eternal love and reincarnation. By taking the primal, emotional route the audience deeply cares about everyone involved, even the minor characters like his daughters. Given that technique, the audience ends up spending much of the movie chasing the ghost of someone that does not seem to be in the scenes. Vallee does a fantastic job of somehow creating negative space in the film by having characters appear and disappear as if in a dream. By the film’s halfway point you aren’t sure what is going on, that takes skill.

Like a puzzle slowly fitting together the film leaves clues for the audience, echoes on the screen to make the final masterpiece. The result doesn’t always work but pulls it off in such a way that it defiantly deserves multiple viewings.