CHELSEA HANDLER WILL BE STREAMING ALL OVER NETFLIX

At Tuesday’s Television Critics Association (TCA) press tour, Chelsea Handler discussed her upcoming involvement with Netflix. Although Handler claims that she doesn’t “know what streaming is” or “how it works,” she is still making a very known presence within the Netflix community.

The former E! host has a talk show and four documentaries in the works, alongside a standup special that was released last fall.

Handler’s upcoming documentaries will discuss various topics, including race and marriage. Additionally, her talk show will release a few episodes weekly—veering away from the late night format. 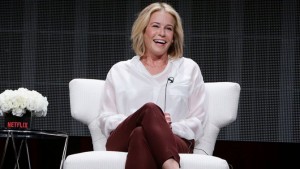 Handler gave praise to the popular steaming service because they’ve allowed her to have creative freedom. After an eight-year run as host for E!’s “Chelsea Lately”, Handler has entered a new phase in her career where she believes to have cultivated her best work yet.

Are you looking forward to seeing Chelsea Handler’s Netflix talk show? Leave your comments below!