Spike Lee’s Chi-Raq has an important message but one that gets lost in translation. That being said, it is still a film that everyone needs to see.

Let me preface this by stating that I come from Chicago. I may no longer live there but I grew up with much of the news that the film covers and the violence that it explores. Not a day goes by that you don’t hear about a stray bullet ending a little child’s life too soon due to rampant gang violence.

According to the statistics given at the beginning of the movie the death toll in Chicago, and especially on its South Side, is far more than that of the Iraqi or Afghan wars. For the first half hour or so Lee presents a hard-hitting look at the violence that tears through the city’s streets. But then everything goes off the rails. 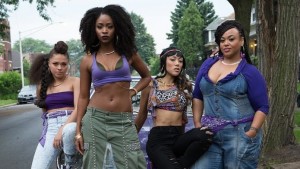 Teyonah Parris tries to brings peace to Chicago in Chi-Raq.

Lee tries to tie together multiple story threads through the famous Greek play Lysistrata creating rhythmic dialogue laced with pop culture references and over the top characters. Lystistrata (the powerful Teyonah Parris) has a revelation one day as she seeks shelter from gang war at the house of Miss Helen (Angela Bassett). Helen informs her that civil wars have been stopped before, by women denying their men sex. This causes Lystistrata to, almost instantly, start mobilizing the women of Chicago in a sex strike that very quickly gains worldwide attention.

The gang war is being fought by Chi-Raq (Nick Cannon) and Cyclops (Wesley Snipes in a cringe worthy performance) in a feud that goes so far back no one remembers what it is even about. Caught in the crossfire is Irene (Jennifer Hudson) whose daughter was recently shot in a drive-by. Helping her through her struggle is Father Mike Corridan (John Cusack). The entire story is narrated by Dolmedes (Samuel L. Jackson) who pops in from time to time to break the fourth wall and highlight the morals of the scenes you have just witnessed.

The truth is Chi-Raq is insanely hit and miss as a film. The message it is trying to get across comes out loud and clear but it sometimes gets muddled juggling too much at once. The film is filled with some truly amazing actors but its side characters, like Mayor McCloud and General King Kong come off as silly caricatures. Whole scenes could have easily been cut from the film and it wouldn’t have lost any of its bite. Tonally, it can become very jarring as the movie switches between satire, drama and even musical. If Lee had only picked a single genre and stuck with it the film would have been much more powerful.

To his credit though, Lee very clearly filmed on location on the South Side of Chicago in some of its toughest neighborhoods. There are a few moments where the true character of the city shines and that is when it is at its best. Every time they cut away to a studio set it becomes obvious and the viewer gets taken out of the movie.

Despite all of its flaws Chi-Raq aims to stop violence in city streets and, to some extent, gives a solid solution on how to accomplish it. Chi-Raq is an extremely timely film so it really does make sense to see it in theaters or as soon as you can. The film is currently in a limited release and will reach VOD soon.