Chicago is well known for many reasons. With a culture famous for pioneering music innovations such as blues and house music, it is no wonder it has a nightlife that reflects its authentic roots.

That being said, June 2 marked the second annual Chicago Nightlife Awards (CNA). Dialed Productions and Do312 paid tribute to industry professionals with a night of appreciation for their commitment to Chicago’s thriving nightlife. Many establishments, promoters, artists and fellow patrons came out to commemorate efforts to keep the scene evolving and happening.

Upon arrival to Concord Music Hall, I knew without a doubt I was in for a night of nonstop entertainment. Stepping through the doors, I was greeted with many faces that looked slightly frazzled with last minute set-up details. The red carpet gala had a slow start, but as nominees strolled in and shared their award prospects, the pace rapidly picked up. From the CNA’s industry panel judges and award presenters to the industry supporters, action on the carpet injected high octane into event kick-off. 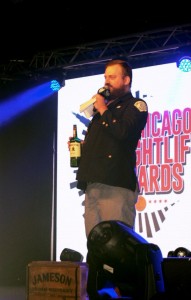 Most notably stealing the carpet’s spotlight, strutting the carpet with his entourage (a.k.a. his band Greesn Denim), was CNA co-host Jesse Camp (MTV). Sporting attire reminiscent of Tommy Lee (circa 1985) with a bit of Bootsy Collins flair, Camp kept the hype of award night escalating with his off the wall chatter of nights

The show started with host Jeremy Scheuch (Do312), armed with a bottle of Jameson, and Camp engaging crowd with their amusing satire. The venues well planned video, lighting and sound were the perfect backdrop for the night’s entertainment.

The night also had live performances by Mic Terror, Glasslux, Hurt Everybody and IDYLL. Spicing up the stage, burlesque dancers Mia Dvine and Claira Bell commanded attention with their provactive and sultry dance moves.

From the award presenters to the award winners, the show was non-stop clowning. Coordinating a gathering of the people that make so many Chicagoans nights entertaining, produced one memorable crazy extravaganza.