Last weekend Chicago was the epicenter for all things Walking Dead and Arrow related.  Walker Stalker Con descended on the Donald E. Stephens Convention Center in Rosemont bringing with it some of the biggest stars in the geek community. That being said though the three-day festival was not for everyone!

The event took place in one of the smaller sections of the convention center and tended to attract more of the fringe elements of zombie culture rather than anything to do with the show. A casual stroll through the aisles had vendors promoting everything from zombie tattoos and face painting to zombie gardening to events where you could get trapped in a room with a zombie. Basically if it had the word zombie in it you were set and they gave you a booth. Typically this is fine but with only four rows of vendors to choose from it lost its appeal pretty quickly. 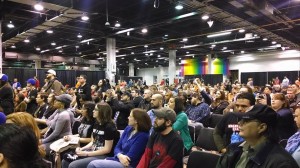 To be fair, no one that attended was really there for the random vendors, they came for the celebrities. Over a dozen actors and actresses from The Walking Dead and Arrow to Game of Thrones and The Tomorrow People showed up to meet fans and celebrate their shows. Getting to your favorite celebrity was a different story. Most of it depended on the popularity of the actor on the show and for some it was distinctly clear who the favorites were. If that didn’t give you a good guide than the prices to get their pictures and autographs might. The average price for a photo with someone ranged anywhere from $20-30 and upwards of $50 for bigger names. That’s nothing compared with the one-on-one photo opportunities that fans paid $100+ each photo. Prices like that meant fans had to choose wisely and decide who deserved their attention the most.

The real treat of the festival though was the ongoing panels in the middle of the hall. Throughout all three days the leads from Arrow and Walking Dead came up to the stage for an impromptu Q&A about their characters on the show. It was nice to see them really loosen up and get to know fans outside of 30 seconds or so they got at their booths. Everyone from little kids to people dressed as zombies had the chance to ask their favorite characters the questions that gnaw away at them each episode. 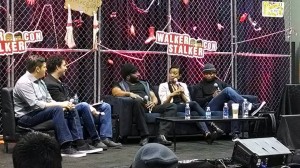 As fun as the convention was, there was a nagging feeling that it could have been so much more. With a little more space and more of an emphasis on show appreciation rather over photo opps it could turn into the cult event it was meant to be.