The only movie that can get attention off Magic Mike XXL is Chocolate City, if you’re  wondering why that is, it’s because Chocolate City the new film by Jean-Claude La Marre is the “chocolate” version of the strip dancing hit Magic Mike. 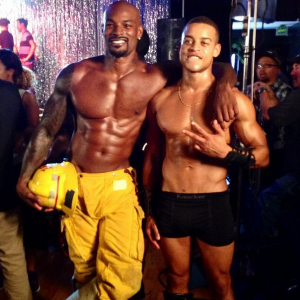 “There’s a lot of eye candy on set” laughs Imani Hakim, who plays “Carmen” in the film.

In Chocolate City, we see the struggle of a college student who becomes a male stripper after he can no longer afford to pay for his studies.  The film stars Robert Ri’chard, Vivivia A. Fox, Ginuwine, Carmen Electra and more.

Actor and friend of director Jean-Claude, Gabriel Casseus, was at the world premiere of Chocolate City to support his good friend. “Unstoppable at what he does,” said Casseus.

Gabriel Casseus also gave Press Pass LA a scoop about the new movie he’s working on with Jean-Claude called The Blazing Four, a western comedy about Blazing Saddles and Magnificent 7.