It’s hard to put into the words how the Press Pass LA staff feels about the tragic news of the death of Christina Grimmie who was shot during a fan meet & greet at her show earlier this week in Orlando. Having spent time with Grimmie during her appearance on “The Voice” Season 6, the tragedy feels especially close to home. 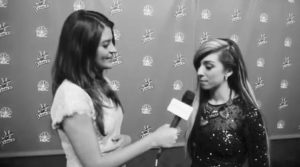 Grimmie was a star long before America met her on Season 6 of the hit show The Voice. The New Jersey native was a Youtube sensation who had more than 3 million subscribers on her channel where she regularly posted powerful renditions of famous cover songs. She was discovered six years ago by Selena Gomez’s uncle, Brian Teefey, who became Grimmie’s manager.  Her career was boosted when she had all four judges on The Voice turn around to her rendition of Miley Cyrus’ “Wrecking Ball.” She joined Team Adam and went on to become a fan favorite that season, finishing as a third place finalist. 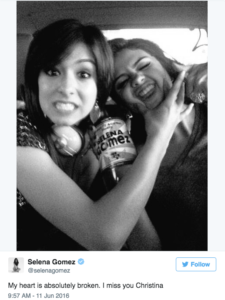 Grimmie’s short career included opening for Selena Gomez several times on tour, becoming close friends with both Gomez and her then boyfriend Justin Bieber, who each paid tribute to the singer this past week during their respective tours. Grimmie also appeared on Ellen at the request of Ellen DeGeneres.

Her life was tragically cut short this week when a 27 year old man carrying two handguns and a knife shot the singer at the Plaza Live in Orlando after a show where she opened for the band Before You Exit. She was in the process of  meeting fans and signing autographs when the shots rang out.

“Almost immediately, her brother Marcus Grimmie tackled the suspect,” Orlando Police Chief John Mina told reporters. “Shortly after that, the suspect killed himself. The suspect traveled to Orlando apparently to commit this crime and then had plans to travel back to where he came from.”

The past few days fans have gone one a roller coaster of devastation, confusion, and anger as to why someone would kill this beautiful soul. The Voice and countless celebrities including her former judges took to Twitter to show their heartbreak and support of the Grimmie family. Fans tweeted in support using the hashtag #PrayforChristina and then tragically #RIPChristinaGrimmie.

Her former coach and mentor Adam Levine releases this statement, “Behati [Levine’s wife] and I are absolutely devastated and heartbroken by Christina Grimmie’s tragic death.” He continued, “Christina was a natural, a gifted talent that comes along so rarely. She was taken from us too soon.” He later contacted Grimmie’s mother and offered to pay for her funeral expenses.

Marcus Grimmie confirmed Levine’s gesture on Facebook and he also paid tribute to his sister saying he has no words, “Christina was more than my sister. She was a partner in life,” he posted. ” A superstar. A goofball. Introverted. And a friend to everyone. Genuinely. But above all…she was my baby sister.” Visit Marcus Grimmie’s Facebook where he continues to post updates on his family’s behalf including the vigil to be held tonight in her hometown in New Jersey.

To get involved, you can donate to Christina Grimmie’s GoFundMe page.