It was a winter wonderland at Debbie Durkin’s annual ECO LUXE Lounge in honor of the Emmy’s. This year’s theme, “Christmas in September,” featured celebrities, journalists, and tastemakers from near and far along with their families. 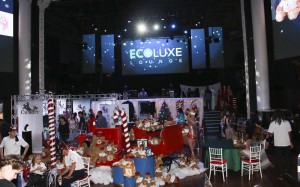 Although the celebrity factor is entertaining, the heart of the event was supporting the non-profit, Shriners Hospitals for Children. Here in Los Angeles the hospital helps provide world class care to children with orthopedic conditions, burns, clef lip and palate, and other medical conditions. Guest enjoyed the WIREIMAGE Holiday Portrait Studio. Unwrapped toys were donated through ECO LUXE to support the children of Shriners Hospitals during Emmy week.

Some of the featured brands this year included a Chariot Luggage, perfect for your next jet setting adventure. Chariot had many options for luggage including high-tech plastics in a variety of solids and prints. Although travel is important, looking great is too! Good thing many clothing and jewelry designers were on hand this Emmy’s weekend!

Sensual, Sensible, and Sensational are really three words to describe SEN Courture. Designer Trang Phung is the creative eye for the brand. SEN Couture is a fashion forward, relentlessly trendy and striking look that can be found in Trang’s boutique on Melrose. Some of the celebrities that have flaunted the couture line include Rebecca Romijn, Toni Braxton, and of course, Jennfier Lopez.

When it comes to assessories, Burnetie Shoes makes one killer pink high top.  Many celebs and industry professionals were really gravitating towards the quality and design.