CINDERELLA: THIS GLASS SLIPPER IS THE PERFECT FIT!

The idea of turning classic children’s fables into live action motion pictures could induce cringe worthy thoughts for cinema goer’s (we’re still reeling over the underwhelming OZ) who hold these timeless tales near and dear to their hearts. The Big Mouse decided to give it a go with one of the most beloved fairytales, Cinderella. 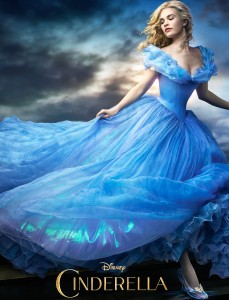 The previews piqued my curiosity, but I was on the fence about whether I wanted to plan an entire night and spend hard earned money on what could end up tarnishing a classic film.  Disney graciously invited media outlets, including Press Pass LA, to enjoy a screening on the Burbank back lot.

It’s always wonderful to see a film here,  It really sets the tone for you to free your mind and escape from the real world for 120 minutes on such a wonderful property.  Guests were first treated to the newest animated short, Frozen Fever, which I am sure will resurrect Elsa costumes for another Halloween (parents can thank Disney for saving them a few bucks this October).

After the cute, light hearted fare, our main attraction began.  The cinematography is breathtaking and the costumes are jaw dropping, to say the least.  The film features such heavy hitters as the immaculate Cate Blanchett perfectly portraying the wicked stepmother and the quirky Helena Bonham Carter as the Fairy Godmother.  These were supporting roles carried with ease by the veterans, but the main characters were seamlessly executed by virtual newcomers Richard Madden as Prince Charming, with eyes as blue as the ocean, and the angelic Lily James (Downton Abbey) as our title heroine, Cinderella. 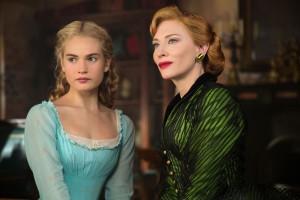 The chemistry was believable and you couldn’t wait for their lives as King and Queen to begin.  As a matter of fact, there wasn’t a miscast in the entire film.  And a bravo to Disney for sprinkling diversity throughout the casting in major and minor roles.  I don’t need to reveal the plot because we all know the story of Cinderella.  No surprise plot twists or alternate endings here, but having said that, it was in one word….MAGICAL!  I was hooked from start to finish.  I even got misty eyed during some of the scenes; Disney took this live action adaptation and got it right!  I would definitely see it again, and I am anxious to see what they do when they adapt Beauty and the Beast in 2016. 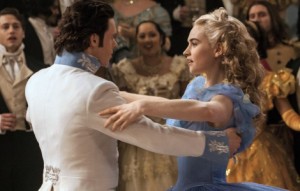