With just around 200 people at the event, the exclusive experience offered radio winners from around the world, including press outlets and country fans an experience to hear all of the new tracks on the album, along with a special treat. Meanwhile, 100% of the ticket sales were donated to the Monroe Carrell Jr. Children’s Hospital at Vanderbilt in Nashville.

With this superstar group selling over 22.5 million albums and over 28 million digital downloads since 2000, it’s no surprise that “Rewind,” is joining the list of their #1 records on iTunes, along with their 14 other #1 songs on the charts. Each song was paired with a unique wine sampling from Hendry’s that matched the tempo and beat of the songs.

Besides delicious wines ranging from Chardonnay to Pinot Noir, they were accompanied by tasty snacks featuring grilled chicken with spicy mango chutney, fried risotto and cheese balls, fried shrimp, and a wide selection of cheese, crackers and grapes. Audience members relaxed into the comfy leather lounge seats or stood along the standing tables that filled the room with their antipastos and enjoyed the listening samples of songs and short clips of the band talking about each one, while the evening ended with Rascall Flatts performing four of their top songs. Two were from the upcoming album, “Paycheck” and “Riot” while one of the songs was their all-time classic, produced over 10 years ago, “God Bless the Broken Road.” 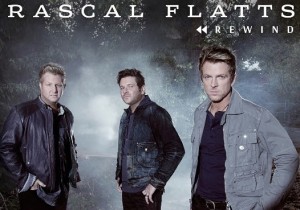 The audience members were gifted with wine goblets, a wine opener, bottle holder and of course, the best treat of the night, the new “Rewind” album. The album is truly another hit, with some of my favorites including, the beautiful yet heartbreaking, “Riot” the upbeat, “DJ Tonight,” and the nostalgic, “Life’s a Song,” written by Jeffrey Still, which the band says appeals to everyone in all walks of life. This new “Rewind,” album is one that will sure to be on “repeat.”