The past few years have been quite busy for Clark Gregg. The actor has gained a cult following through his role as Agent Coulson in the Marvel Cinematic Universe, a character that has gained new life this past year with Marvel’s Agents of SHIELD.

What most people don’t realize is that Gregg is also an experienced screenwriter and director. Trust Me, which will be released in theaters this June, marks the second time he has proved himself a triple threat as a talented writer, director and actor. 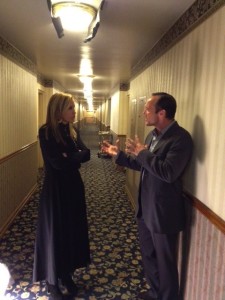 The film tells the tale of Howard Holloway (played beautifully by Gregg), a down-and-out agent in Los Angeles that specializes in child stars. After experiencing the kind of day that would make most people quit and change careers he stumbles on to the chance of a lifetime with a mysterious new client. It is a smart, touching movie that seamlessly switches between comedy and drama allowing Gregg to really flex his movie making skills on all levels (read our review here).

Press Pass LA had the chance to sit down with Gregg to discuss the movie and his career.

PPLA: You pull triple duty on Trust Me as writer, director and lead actor. How did you find time to do all that between projects? It seems like Marvel has been keeping you busy.

CG: This is something I had been working on since before The Avengers happened. After that movie I was pretty much dead, there was lots of blood, so I went on to work on other things like I had before I got involved with Marvel.

It was only on the first day of shooting Trust Me that Joss [Whedon] called me up and told me they had found a way to resurrect me in this really dark, existential way. That’s how I was sold immediately on Agents of SHIELD.

After Choke I promised myself I wouldn’t make a film that I also starred in that was shot in such a short period of time. But I was brought in to do Joss [Whedon’s] Much Ado About Nothing and saw what he could pull off in such a short time and it really gave me the inspiration to go forward with it. 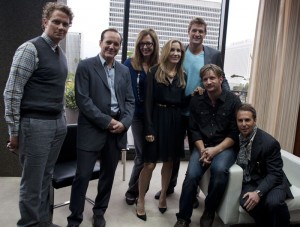 PPLA: What was your inspiration for creating a character like Howard Holloway? Did you always know you were going to play him when you wrote it?

CG: No I didn’t. I started out writing this story about a bunch of different people in Los Angeles that was about four hours long. There was one story in there that really didn’t seem to fit. It was this almost noir-ish story about a down on his luck guy and that eventually turned into the movie. I found I had a weird connection to this guy and my creative partner and casting director Mary Vernieu recommended that I play the role. Luckily the people I reached out about the film thought it was a good idea too. It nearly killed me doing all of those roles but it was one of the best experiences I’ve ever done.

PPLA: Saxon Sharbino gives a truly powerful performance, what was it like working with her?

CG: We couldn’t have made the movie unless we found someone that could take your breath away. My partner saw her work and recommended me to her and we were all just blown away. She was so real in the role and could really hold her own.

PPLA: After owning the role of Coulson for so long you’ve certainly earned a place in the Marvel Cinematic Universe. Have you ever thought about writing or directing for them?

CG: I have. I love stuff like that. It really feels like a different beast from my independent projects. It is my dream to write a project that would do it justice but it has to be right project.

PPLA: With Agents of SHIELD on hiatus until the fall are there any other projects you’ve been working on or would like to work on?

CG: To be honest it was only three and a half, no four weeks ago, I was standing on the set of Agents of SHIELD finishing that up and then I’ve been out spreading the word about this movie. Once that’s over I think I’m going to sleep for about a week.

Trust Me is currently available on VOD and iTunes and will hit theaters nationwide on June 6, 2014.