the Detroit Lions) teamed up with Choices Recovery   to do interviews. The personalities helped create awareness about addictions often seen in Hollywood. While taping, Masterson and Moore absolutely loved Infiniti Sweets!

DJ Mike Shay of Superbox Music   kept the music bumpin while Sugar and Spyked  kept it sweet! Tattoo applications were done by Adam Daniel who is a personal tattoo artist to Bruno Mars. The boys of Nash Motorcycles, Trent, Teddy, and Taber were on hand to give product demonstrations and answer questions about the company’s latest bikes.

For lunch, guests enjoyed scrumptious food from Fresh & Meaty’s  food truck. Fresh and Meaty is becoming a Hyde Park favorite! Beachwood BBQ & Brewing  showcased their award winning beers that were served in sustainable tableware from the one and only Repurpose Compostables. 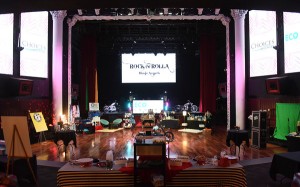 Yoga enthusiasts came home happy with Brazilian yoga jumpsuits from Shama Jade, while jewelry from STAGE Men’s Collection & Glamarella JUNK were the “hot ticket items.” Vacations to Moab, Utah and Glacier National Forest from Under Canvas are perfect for your company’s next retreat! Over in the celebrity pet lounge, CAMP Run-A-was featured. Camp Run-A–Mutt is known as, the premiere doggy daycare in socal. The heart of the event however was, Letters To The Universe which is a blog with inspirational and motivational quotes for all to enjoy!

Press Pass LA will be back to the EcoLuxe Lounge  for continuing coverage of the Emmys suite in September. Contact event producer for sponsorships.