Today is the day! No, not Judgement Day (that day is August 29 sometime in the not too far off future, ask John Connor)….No, the day in question is the day where over two hundred thousand people will wake up ready to party. I mean RAGE! More than likely in houses, hotel rooms, and RVs all over SoCal the same scene will be played out similarly. It’s called Coachella Weekend 1.

It will go something like this… The sun breaks on the horizon like an egg yolk. The people are awakened to the smell of honey suckle and jasmine in the breeze. They’ll draw in big breaths of excitement as they eat their Flutie Flakes, drink their wheat grass infused coffee, fill their MK overnight bags with clothes and toiletries, grab their brown wafer framed sunglasses and jump in the car to make the trip to meet up with friends to make their way through the badlands. The wind will whip through the desert as the slight whisper of an anxious kid trying not to wake a monster brooding. It will pulse in their ears. The sound of the reckoning…..Don dun DOOONNN…..(Whispers) Cooooaaaaccchhheeellllaaa.

So, this is it, Coachella. This is the weekend that we’ve all been waiting for. The Southern California tornado of glitter, glitz and grins. The masses of intrinsic tinseltown clowns ready to open up shop in the desert circus and juggle everything they can. It’s time! The secret is out. What secret? Oh, oh, you didn’t know…well, come here, let me school you to something fool. The secret to Coachella, which is the reason this has become THE festival for celebs to be seen at, is the fashion. Yep. Fashion. It simple really. As much as the world buys into the Fest to see the bands and listen to the music…and well, party. The desert scene has taken on a life of its own. It is the scene to be seen at and in, as long as you can peddle the correct attire, and you’re sponsored by someone who can foot the bill, you’re golden.

Most Americans may not realize it, but the two weekend event that is Coachella, is mainly sponsored by the Fashion Industry. While the campers, dirty hippies and druggies all stand in line to buy $40 bottles of water and take inhumanly large dumps in a porto potty because their faculties can’t handle all that powdered vitamin B and laxatives they’ve been shoveling into their body’s all night, the real fun of Coachella is happening in the desert surrounding Coachella. At the hotel pools and private homes, where Coachella’s bells are being rang by the spenders, lenders and heavy weight contenders. 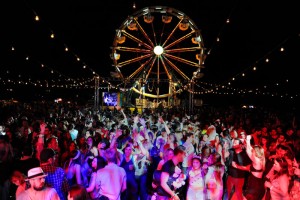 What started out as a way to promote and break new bands has turned into a way to promote and break new fashion lines which then became the go to place to introduce new seasonal lines for designers and brands alike…And so it evolved and transformed into an entire weekend of support for the music fest fed by party after party, sponsored by brand after brand catered to by claim after claim of exclusivity. Its a series of hard to get into places to get wasted and try on clothes so that you can try to take them off later in the evening. Welcome to Coachella after parties!

Lets take the tour starting with the hardest to get into and the one the garnishes the most coverage, Neon Carnival. The pop-up carnival that is everything but a pop-up. It a full on fashionista’s wetdream in the middle of the desert under a Ferris Wheel. Nylon and Olay Fresh Effects presents Neon Carnival with GUESS. You see what I’m saying? All these parties have these amazingly elaborate names that clue you in on how beautiful the people inside of the party are. This party how ever is a carnival sponsored by the three companies, in which celebs and models alike brave the “crowds” to have fun some fun. Open bars, carnival rides, music and Guess-themed games and giveaways, make this THE after party of the weekend. The party happens on Saturday night, which gives you plenty of time to chat everyone up Thursday night and all day Friday to get your name on the list, because if it’s not on the list, you don’t exist.

Now that we got that one out of the way, let’s move on to some others that should be touched on. Believe it or not, there has been a prevailing thought, as of late, to the reasoning of not buying a ticket to the actual festival and just frequenting the constant stream of pop up tent events, BBQs and pool parties instead (Most of these events sell tickets too). Its understandable to want to mingle with fellow Coachellans while not getting filthy on the grounds and sitting pretty by the pool parties. Like at Tilly’s X Dickie’s Desert lounge. An event that runs all weekend, both weekends, in which the public can RSVP and get bottle service poolside while listening the stylings of DJ Mom Jeans (Danny Masterson. Yeah, the dude from That Seventies Show. *Blank stare* I know.) The thing runs for multiple days at multiple times at Ace’s Hotel Desert Lounge. It kicks off Thursday night and is one of the few Thursday night parties to be had so make it worth it.

Come Friday, the stuff starts to get serious. Like the LED Day Club at the HardRock Hotel in Palm Springs where the weekend line up gets kicked off by guest appearances by Skrillex, David Guetta, and Dirty South before and after their Coachella sets. You can purchase tickets, but by this time to be honest they’re sold out. It would take an act of God or maybe a shaming sexual favor to get into those parties, but they could still be worth it. 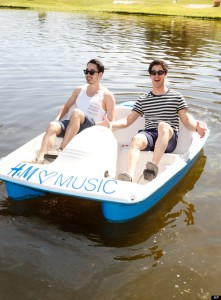 How about the party of the technological celebs. You know, the ones we tend to follow because they’re just insanely hilarious people who can express themselves semi-coherently in 140 characters or less? The Influential House is an open invite festivity (rare). This is the party where 150 of the most followed people on Twitter, Instagram and Vine are doing it big in the desert as they hashtag their way through bottles of Grey Goose while wearing bathing suits and sweating all over their matching Turquoise Iphone 5c. This party runs Friday through Sunday, RSVP and they’ll email you the party location.

Still though, what people want is the elusive and exclusive. The invite only parties. Harper’s Bazaar has an interesting one where the Editor and Chief herself, Julianne Hough, is hosting the live music and debauchery. Where scantily clad women and the beautifully carved faces of the fashion elite will be invited to look upon the masses of party goers to say the word fabulous a thousand times, in compliment of everything. Its a private event, but if you book a private styling session that is being offered (and most likely fully booked by now) you can get in, Be ready to spend some cash. Its hard not to…Its Harper’s Bazaar people.

How about Details Magazine? They’re hosting a party sponsored by Lexus in which it is listed guests only. If you’re not on the list you’re not in. Its exclusive and held at a private home so you know its going to be so amazingly savage it would make a weekend in Thailand look like daycare. Is that a redundancy? Another private event held in a private home is the Bootsy Bellow Estate. This invite only party is where Juicy J will perform and undoubtedly make all the young lady’s who were in daycare not that long ago twerk all over the party like a Barney sing long gone all wrong rightly. The elite though, they go to some of the most well noted invite only parties like The H&M (Heart) Music party. This is the only official after party of Coachella. Why? Because H&M is an official Coachella sponsor. This is a serious invite only. The Execs and big swinging Richards only. 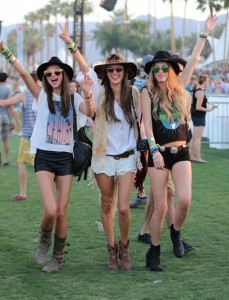 The truth is, during Coachella the party’s are everywhere. For most of them, all you have to do is RSVP to reserve a table and you’re in (by now though if you don’t have an RSVP Confirmation, you’re screwed anyway). This weekend has become a world all to its own. Two worlds in fact. The actual festival itself, and the after parties promoting the festival and its sponsors. People have become fanatic about this thing. Its like burning man, except the opposite, but with the same wholehearted loyalty. Especially amongst the goers who love the spectacle of being a spectacle. Its fun for the whole family, if your family is you know, one part Kardashian, two parts Hefner, and all Versace. So, do yourself the favor, make it down there at least once in your life. You won’t regret it. Worst case scenario, you have a good jail story, or end up with a child