Collins Key is nominated for his use of Live.me in the Live category of tonight’s Streamy’s.  He was the first magician to ever make the finals during his time on America’s Got Talent and opened up for Demi Lovato on her 29-city tour! He has more than 1.7M subscribers on Youtube and is best known for his videos featuring magic, pranks, and hilarious product testing. You never know who will show up on one of his popular collabs! We had to find out what the secret is to his success….must be magic 😉

PPLA:  When did you first decide you wanted to create a Youtube page and how did you decide what type of content you would create?

CK: I started my Youtube page when I was 15 because I thought it would be a great way to share my magic.

PPLA: When did you realize this could become a career?

CK: This can be a career?  Haha it just slowly started to happen for me.

PPLA: How does it feel to be nominated for a Streamy?

CK: It is exciting! I feel really honored.

PPLA: Do you have a favorite video you’ve created?

CK: I put a lot of work into all of my videos, so I can’t really say I have a favorite because I am actually proud of them all.

PPLA: When did you first start training to become a magician? What was it like to be on AGT?

CK: I started doing magic when I was 12 years old and I loved the ability to walk up to anyone and do magic for them. America’s Got Talent was such an incredible experience, that was the first time I performed for that big of an audience.. 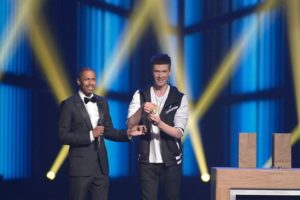 PPLA: Best prank that was ever played on you?

CK: While performing with Demi Lovato on her Neon Lights Tour, Demi pulled pranks on us all by coming on stage dressed as Olaf from Frozen and throwing pies in our face.  We all had the best time on that tour!

CK: Doing a project with AT&T HelloLab that will be coming out on my channel soon and some other fun projects I am not allowed to talk about yet. 😉

PPLA: Youtuber or Celeb you’d love to collaborate with but haven’t yet?

PPLA: Advice for anyone wanting to get into Youtube now?

CK: Have as much fun with it as you can!

In addition, #TeamInternet’s Kurt Hugo Schneider and Sam Tsui will honor the late Christina Grimmie and her fans by performing a medley of her songs and covers during the show.