WHEN IT ALL COMES DOWN: NEW MEDIA “THE COMPLEX” 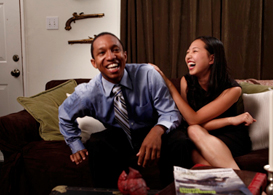 New Web Series The Complex shows that passion pays off. Two and a half years ago, at The Atlantic Theatre Company,” five graduates decided they would go out to L.A., to work together as a team on something. Anything. With the kind of drive they sported, tumbleweeds must have been rolling North of South, East, and West when they made their journey through the California desert!

Now, just about anybody with a dream could promote this as their story, right? But how many get the chance to completely self-finance, and self-promote a Web Series that makes it’s debut on Sunset Blvd. after two years of tumultuous blood, sweat and tears? Well…not as many as you’d think!

But the five youngsters of Bad Bonsai Productions made it happen. The aforementioned Web Series is called “The Complex,” and is the story of a young man, James (an engaging performance by James Edward Shippy) who has been dumped by his girlfriend. Bumming on couches with his friends in the very apartment complex (hence, the first of the double entendre surrounding the title) which she lives, James vows to win her back. Thus sets off the premise for the ten-part Web Series, which debuted Monday, September 10th online.

The presentation of the story itself is a relaxed narrative that doesn’t take itself too seriously, and that’s a beautiful thing. In a time when Web Series and other online storytelling is becoming general entertainment fodder, a show like this, by a small self-financed group of people, could grow into something symbolic for the ages. It’s very clear that the writers (headed by the vivacious Lauren Smerkanich) took to heart what was being written; the light bits of comedy sprinkled throughout the series premiere (and subsequent three webisodes) are not pretentious or self promoting, but rather accessible situations of humiliation and awkward moments that everyone has experienced, made even funnier by the buoyant performances. And it’s these performances that the creators hope will make all the difference.

Hannah Louis Miller (who plays one of the delightful neighbors) just may have been the most impressionable of the actual performers, and her attitude towards the The Complex is a contagiously positive one. “The creative control is great” she charmingly admits, “but we’ve been working on this for so long, our original idea has been transcended.” It would be enough to see one’s own work and how empowering it must be, but with potential like this show has, it would behoove the makers to think in terms of how greatly they could impact their audiences. It would certainly promote the show via word of mouth, and with a cast and crew so small, everybody would get a piece of the cheese.

Things look to be headed that way too. The show’s premier, held at the Nerdist Theatre, at Meltdown Comics in Hollywood, commenced an excitement that related to it’s attendance like badasslazy, and that’s a good thing! Audiences found the first few webisodes funny, all the punches were given appropriate laughs, and the whole affair ended with thunderous applause. The impressive turnout too, showed that a Webseries like The Complex given the right time, budget, and dedication, can reach the lengths and celebrity that more famous and promoted Webseries do.

It’s an art form still being hatched by the myriads of young filmmakers in Hollywood today, and The Complex itself should find an eclectic audience of classy comedy lovers, and quirky lifers within it’s second season, which I have no doubt is on the way. Nothing will take the place of the feature film, but when it all comes down, filmmakers with the right amount of passion and dedication can pull off something of value.  The Complex stands as a milestone to prove this. Years down the line, when Hollywood premieres like this one are commonplace for online entertainment, Smerkanich and co. will be able to say that they trail-blazed this hip event. With a long journey ahead of them though, the Bad Bonsai Production team seem to have just what it takes to make it work, and last in Hollywood, and nothing is more ponderous than what would become of a film adaptation of The Complex!

Support The Complex on Kickstarter