Every year comic lovers line up for memorabilia, insanity camp out for Hall H, costumes, games, and books. Publishers bring out the best of their line up and supply readers with ARC’s ( advance reader copies) and finished copies of their hottest authors. Many of these authors like ‘Outlander”s Diana Gabaldon go on to ink hit series deals on Starz, followed by the hotly anticipated ‘American Gods’ by Neil Gaiman on the same network. However, nothing has yet touched the pandemonium behind Game of Thrones or the untouchable JK Rowling. This is our look into the best sellers of the upcoming year presented at Comic Con 2016.

With stars in our eyes, we feel it was just yesterday that we laid our hands on Sarah J Maas’ ‘ Throne of Glass’ series which has spawned a now 6 book series, with so many novella’s they are also a book and another series of elves titled ” A Court of Thorns and Roses” whose sophomore follow up killed the NYT bestseller list for 9 weeks. Unbelievable. Comic con is THE place to go for up and coming authors, heavy hitters, and advance copies of what is soon to be your must watch tv show/film franchise.

Reese Witherspoon picked up ‘Wild’ and fun fact was the producer on ‘Gone Girl’. Her work of epic thrilling story telling adaptations is not finished as she has acquired the rights to ‘The Woman in Cabin 10’ by Ruth Ware. Chills..so many chills.

With HBO’s Game of Thrones coming to a series end we are left wondering if they will pick up the Scifi epic ‘Red Rising’ or see Legendary Pictures snatch it up for its big screen debut. Its everything these companies are known for, with enough suspense and politics to put reality to shame. After a stellar three book series author Pierce Brown is set to release his fourth installment which takes place in “Red’s” universe but ten years in the future with the after affects of this previous main characters decisions. We won’t run into much detail, as we’d like for you to discover the world of ‘Red Rising’ of your own volition. But we will say; it’s dark and not too far off the mark from what we would do to one another today.

For lighter fantasy we thoroughly enjoy Susan Dennard’s Witchlands series. The second book in Safiya and Iseult’s journey debut’s next year titled ‘Wind Witch’. With war brewing on the horizon and a fantasy epic based on the deep friendship these girls share…we think it would find a happy home on your tv screens on Freeform beside the ever growing fandom of Cassandra Clare’s ‘Mortal Instrument’ series, currently running as “Shadow Hunters”.

Del Rey books is presenting us with this delicious Downton Abbey inspired fantasy of an upper class run by magic users who enslave the general ‘unskilled’ populace for a period of ten years. Dark and filled with so much of the upstairs/downstairs drama we couldn’t pull away from in Downton this is a series you’ll want to have nearby this year. What happens to a populace when one ruling faction has the ability to silence you or erase your memory? Next on our Del Rey hit list is ‘Sleeping Giants’ by Sylvain Neuvel……which is available now on amazon (FOR A DISCOUNT..shhh).

Lovers of terror should be on the look out for ‘Little Heaven’ by Nick Cutter. This book harkens back to old school terror and the storyline is set in mid-century New Mexico; with a cast of characters and plot lines, that will leave you afraid yet daring to turn the page.

Random House has us anxiously awaiting the debut of ‘A Shadow Bright and Burning’ by Jessica Cluess as well as ‘And I Darken’ by Kiersten White. Jessica’s book promises another strong female character as our protagonist and on the wave of seeing the new female blockbuster directed ‘Wonder Woman’ starring Gal Gadot we can’t wait for more badass leading females. While ‘And I Darken’ is available now, for those of you out there on the hunt for a good book now.

‘Ninth City Burning’ by J Patrick Black is a promising sci-fi fantasy. Lovers of ‘The Chronicles of Narnia’ will love ( or despise…choices) the invaders from another realm whose main source of weaponry is actually their ability to bring magic into our world.

Stay tuned for more book updates as we make it through our epic pile of arc’s and expected heavy hitters here at the PPLA office. 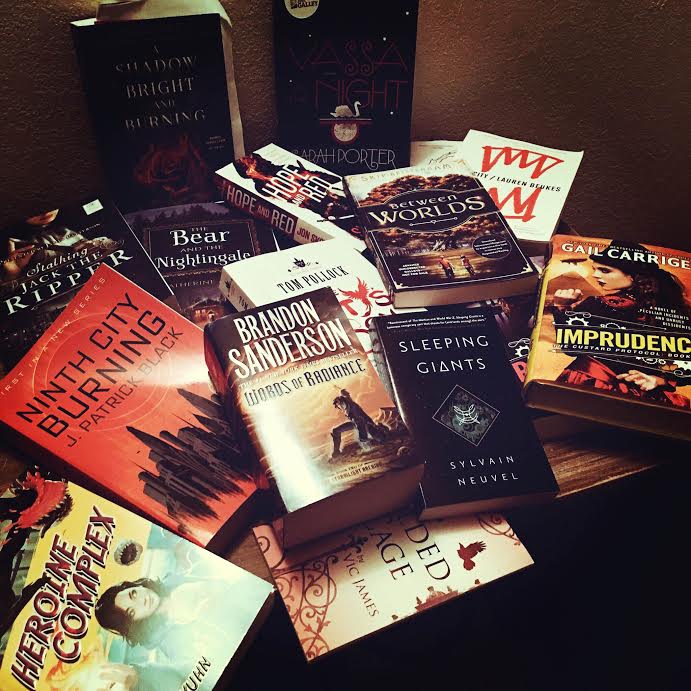