Coming Full Circle with Gilmore Girls: A Year in the Life

This past Thanksgiving weekend, rising from the ashes, with a recognizable melodic a cappella intro, was the highly anticipated Gilmore Girls: A Year in the Life. Many waited with bated breath to hear the final four words that show creator Amy Sherman-Palladino remarked as the true ending of her inspiring TV show, Gilmore Girls, which aired its final episode without her in 2007.

In an age where reboots and revivals come and go, delivering diluted nostalgia with dated dialogue (Fuller House anyone?), this quartet of 90-minute episodes sings with both purpose and feeling, honoring the original work, while composing relevant content for 2016.

The four-part mini-series continues with the theme of mother-daughter relationships, while delving into denotative topics, such as grief and loss, through the use of the familiar flair of fast-paced banter and pop culture references. Each episode attempts to close gaps in the story arch from the first series, while addressing nine years of non-existence, with the all-encompassing theme of everything coming full circle. The past and the present mirror each other beautifully, and even with the final four words, any enthusiast will see the multi-generational celebrations, mistakes, flaws and beauty of the Gilmore world.

With each episode titled as one of the four seasons, the show opens with Winter, setting the mood of comfort and welcome that the fans have been anxiously awaiting. In protagonist Lorelai Gilmore’s own words, “everything’s magical when it snows.” This appropriate choice for the starting episode allows the camera to frame all the townsfolk and the girls in a seamless fashion, creating a kind of magic in the realism, that everyone is right where we left them.

As if fated by the god’s, the show opens with a 32-year-old Rory Gilmore (Alexis Bledel) now the same age her mother was at the start of the original series. She is found with her hopes and dreams packed away in the many boxes she is living out, in an unsatisfying relationship, and her career in a rut. True to their mother-daughter connection, coffee obsessed Lorelai Gilmore (Lauren Graham) is found echoing the same struggles, with fears for her relationship and questions about her next steps at the Dragonfly Inn. These notes mark the constant uncertainty the girls are known for. Never changing, of course, is the continuing strained relationship between Lorelai and her mother, Emily Gilmore (Kelly Bishop).

Fans will rejoice that the quirky townies are still to be found in beloved Stars Hollow, the primary setting of the show. There’s screwball scheming Kirk (Sean Gunn), sassy mouthed Gypsy (Rose Abdoo), not to mention the Town Troubadour playing soulful sounds in all his “glorious mystic”. This small town delights viewers with it’s goofy traditions and zany citizens, while embracing a new generation of challenges. Such struggles as hosting the first Gay Pride Parade and the welcoming of the 30-Something Gang, can only add to the brilliance of an already inventive show.

This reincarnation of the show is not without it’s flaws, however. The third episode, Summer, has a never-ending musical score, that could have been shortened, or even replaced with more Friday night dinners at Emily’s house. Conflicting schedules for the actress Melissa McCarthy turned beloved primary character Sookie St. James’s spotlight moment into a walk on role. Lastly, bibliophiles will notice much less variety and fewer literary references, this go-around. Despite these imperfections, audiences will fall back in love with everything Gilmore, creating new memories while simultaneously reminiscing from previously watched episodes.

One notable absence from the show is that of the character Richard Gilmore, husband, father, and grandfather, who was magnificently played by the now deceased Edward Herrmann. Viewers may find it hard to imagine a show without his strong patriarchal presence, the one constant male in all the girls’ lives. In observance of the late actor, who passed away in 2014, the show made the right decision in allowing cast and audiences to mourn his death with a funeral in the show. Remarkably, the essence of Richard is felt throughout each episode, paying tribute to a dynamic character portrayed by the very capable and memorable actor. 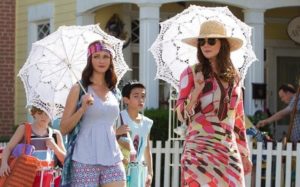 Because Herrmann’s death loomed large over the set, Sherman-Palladino did not shy away from this knowledge. Instead she chooses to embrace it with a commanding portrait, dominating the wall, creating both shock and comic relief, reminding everyone that his character’s presence can be sensed both literally and figuratively. Richard’s passing also becomes the catalyst in challenging Emily and Lorelai’s continued inability to communicate with each other. Instead they are forced to connect through their shared grief. His wishes, never to be ignored in Gilmore Girls, are also made known. We discover that Richard has left instructions and money on “how to build an empire”, for Luke Danes (Scott Patterson), Lorelai’s love interest.

Audiences both old and new can conveniently watch this mini-series and revisit the original, or vise versa, on Netflix streaming. Gilmore Girls: A Year in the Life marries the past and the present, creating a circular causality by answering the unanswered questions that create even more unanswered questions. This ebb and flow does allow the showrunner to develop a sequel, as well as a prequel, if they so choose, especially after that cliffhanger of an ending. Still, if we never get another new episode, A Year in the Life is the gift fans deserve.