Medical drams films can be lengthy, to some people boring, while to others very intriguing.The film Concussion is a medical journey, in attempt to prove the effects of head to head collisions amongst football players.

Dr. Bennet Omalu, portrayed by Will Smith, decided to ask the question why football player Mike Webster (David Morse) died at such a young age. 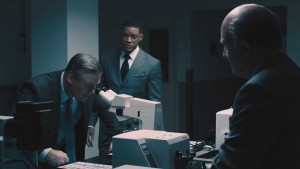 Will Smith and Alec Baldwin shine in Concussion.

Director Peter Landesman did an amazing job capturing Pittsburg’s bridges the city, which denied the findings of Dr. Omalu as they felt threatened by the discovery of Chronic Traumatic Encephalopathy. This film has a great cast, Gugu Mbatha-Raw’s performance as Prema Mutiso (Dr. Omalu’s wife) is outstanding. The film is not dull; it’s intriguing and has a touch of sarcastic comedy to lighten up the mood.

Albert Brooks, portrayal of Dr. Cyril Wecht is comic. His witty remarks and mentoring behavior towards Dr. Omalu depict the relationship these two men had. Strangely enough this masterpiece is not about football, it’s not about touchdowns or that theatrical last second tiebreaker- the science behind it is compelling and unveils the tragedy football players face.