Sometimes TV does it better. That’s really all there is to it. While this may be the second time DC Comic’s Constantine has been on screen, this time the networks have the chance to give the character the room it needs to really grow.

For those that don’t remember, way back in 2005 Keanu Reeve’s starred in a film by the same name and, even though he was American, the character was essentially the same. While the movie did a good job of world building  it didn’t do quite well enough at the box office to foster a franchise and quickly found its way to obscurity.

Almost 10 years later, at the height of a comic book renaissance on both the big and small screen, it is time for the re-emergence of the great John Constantine. As originally written in the comics Constantine is an occult detective, working class magician and con man. This time around NBC and DC have decided to stay true to the character’s roots and mythology creating a series that, based on the pilot, should be absolutely riveting as it unfolds.

When we first meet Constantine he’s checked himself into a British mental hospital to try and wipe away the demons that haunt him. This only works for so long as the forces of heaven and hell are determined to get him back in the game. Newcomer Matt Ryan plays the role perfectly with just the right amount of old school punk about him to make the character both dangerous and mysterious.

Still, the highlight of the show comes in its willingness to connect to the larger DC universe. Though subtle, Constantine is filled with easter eggs that suggest that his world is far stranger than it lets on. How the TV show uses those connections should be interesting since this isn’t your standard cape and cowl show like Arrow or The Flash. 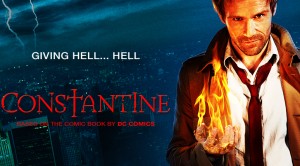 The pilot managed to be both scary and relatable, something which is hard to pull off. In terms of tone there’s a good chance that Constantine could make a great replacement for the well over the hill Supernatural. Though the movie gave us just a glimpse of Constantine’s world the long form storytelling of television should really make it standout and shine.