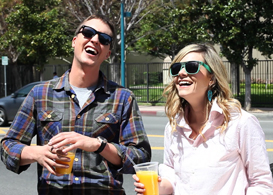 Stand-up comedian Heather Turman and actor Chris Manitius are gearing up to launch their co-effort, Conversations with Future Stars, on September 17thon on Blip.tv. The series is a scripted comedy that follows two talentless narcissists as they attempt to shortcut their way to superstardom.

In a comedic style all their own, stars Chris and Heather hatch hair-brained schemes attempting to blow open the doors to Hollywood stardom. Reminiscent of Lucy and Ethel (I Love Lucy), and channeling a 30 Rock-esque style, Conversations is about extremism and the inevitable consequences of when you go too far.

Hinging on American ambition, the show speaks to anyone wanting to make something of themselves, and to anyone who ever wanted to take a short cut to get ahead. The two leads are relatable in their desire to be successful, yet they are sadly misguided; their missteps only compounded by their spiritual and moral bankruptcy.

A dark comedy about ambition, narcissism, and dogged self-interest, the show cautions against extremism, while poking fun at Hollywood and the pursuit of Hollywood. Guest stars include Rebekah Kochan of the Eating Out franchise, Dante ofLast Comic Standing, Amy Lyndon (Ugly Betty, NCIS, Workshop), Heidi Niedermeyer (Shit People Say in LA) and more.

In the pilot episode Chris and Heather take us through their schemes of trying to get famous quick. First stop on the Hollywood trail is Scientology. They figure if it worked for Danny Zuko and Maverick (John Travolta & Tom Cruise), it’s good enough for them! Check out the episode here.  I hope you love it as much as I did. Their web series has that Curb Your Enthusiasm feel and I can’t wait to see if these two find the secret to becoming super stars in a short time… I sure as hell know everyone in this town is dying to know!

The series was financed by a campaign on Indiegogo, in a successful story of crowd-sourcing. You can also find Heather (repped by Contemporary Talent Partners) taking over the stage at comedy clubs all around Los Angeles. Check her out at HeatherBraibed.com & follow her @heatherturnman  for more laughs and to find out where you can see her next. When Chris (repped by The Polygon Group) isn’t sipping Mimosa’s and braving the Scientology churches he is steadily pursuing his acting career. Follow him @chrismanitius.

For more Conversations with Futures Stars check back every Monday to get your weekly dose of a new episode and be sure to ‘Like’ them on Facebook.