Press Pass LA was on the red carpet for the 2014 Creative Arts Emmys at the Nokia Theatre L.A. Live. We spoke with nominees from TV’s hottest shows including Dog With A Blog, Fargo, Robot Chicken, and more. 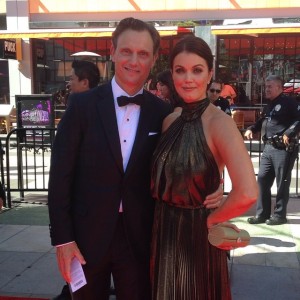 This show highlights the technical and behind-the-scenes Emmy winners and takes place the weekend before the Primetime Emmy Awards. Some of the categories include sound mixing, stunt coordination, reality programming, TV documentary, and direction of mini-series, to name a few.

It also includes acting awards for categories like best guest actor or actress on a TV series, and many Primetime Emmy Awards nominees were in attendance as presenters.  Some of the celebrities we spotted on the red carpet included Tony Goldwyn, Bellamy Young, Seth Green, Jane Lynch, Allison Janney, Heidi Klum, Beau Bridges and couple Jenny McCarthy and Donny Wahlberg.