I have been lucky enough to see one of the most fun, hilarious, and nostalgic pieces of theater that I experienced in quite some time, and that would be “The Cruel Intentions Unauthorized Musical Parody” at the Rockwell Theater in Los Angeles.  Truth is, I have seen it twice, and yes, I am going back for a third time…and I have no shame!

What is so magical about this show you ask?  Well, I will break it down for you.  The creative team that are behind it all are Jordan Ross, Lindsey Rosin, and Zach Spound.  Both Ross and Rosin produced the show and adapted the script from Roger Kumble’s film.  Rosin directed and the amazing Spound is the musical director. Who would have thought that this cult classic would be turned into this fantastic piece of musical theater over 15 years later?   I certainly did not, or else I would have come up with the idea myself, however I highly doubt I would have done the killer job this creative trio did. 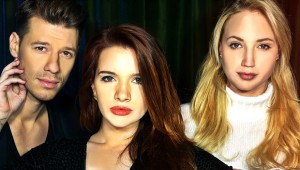 The cast of The Cruel Intentions Unauthorized Musical Parody.

Let’s start with the cast, which I can sum up in one word, AMAZING.  What started off as a fun passion project, has now been turned into a Hollywood must see, even the stars of the film had to come and see what everyone was raving about.  While the cast has shifted a bit since its April premiere, each and every one of the actors blew it out of the park, and I would know since I have seen it twice.  The first time I saw the show, I was completely blown away by Katie Stevens, who plays the role of Kathryn.  Stevens was a top 8 finalist on “American Idol” in 2010, and is now one of the stars of the hit MTV show “Faking It.”

Kathryn is now played by the “Pretty Little Liars” star Janel Parrish, and I literally cannot decide whose performance I liked more.  The role of Annette is played by the insanely talented Molly McCook, who has a slew of TV credits like “Glee” and “Man Up.”  Selma Blaire’s role in the film, Cecile, is played by the Spring Awakening alum Emma Hutton, who not only was the comic relief of the show, but was by far one of the greatest vocal performances I have ever seen live.

I have seen the role of Sebastian played by both John Krause, who is best known for her US National tour of “American Idiot,” and Constantine Rousouli who has appeared on Broadway in “Wicked” and “Hairspray.” Both actors totally killed it.

I could go on and on forever about this outstanding cast, but we have to talk about the most Impressive part of the show, THE MUSIC!  The creative director Zach Spound, as mentioned above, did an amazing job arranging the songs to fit in perfectly within the plot.  As those of you know that have seen “Cruel Intentions” the film, it is not centered on music at all.  With that being said, it did have a pretty great 90’s soundtrack, which of course is utilized in the music they chose.  However it is so much more than just the soundtrack intertwined into the film’s script.  They only use a few of songs actually in the film, including “Every Me and Every You,” “Love Me,” “Colorblind,” and of course “Bittersweet Symphony.”
The second time I saw the show I wrote down every single song performed, which turned into a stellar Spotify playlist by the way.

However, the performances and arrangements of the songs were so good, that I find myself wanting to hear the versions from the show as opposed to the originals.   I kid you not, Katie Steven’s performance of “You Oughta Know” by Alanis Morissette is so fantastic that I am constantly Youtubing it trying to out how to figure out how to somehow download it so I can listen to it on repeat.  The rest of the soundtrack has some of the most amazing throwback hits by some of the best 90’s and early 2000s pop sensations including, Christina Aguilera, TLC, Spice Girls,  Britney Spears, Natalie Imbruglia, No Doubt, both Backstreet Boys and N’sync mashed up into one song (“I Want It That Way” combined with “Bye Bye Bye,” pure genius!) and more.

While the ambiance of The Rockwell Theater in Los Feliz is perfect for this show, it is indeed closing at the end of July.  I honestly cannot stress enough what a special show this is, and if The Rockwell isn’t going to extend the dates, then please for the love of all things 90s, give it another home!  The show is just starting to really gain a serious following, and the only people outside of LA that really know about it are my family and friends whom I have bombarded with videos week after week.

Even though I think “the show must go on,” creators Ross and Rosin have their hands full at the moment with their new musical adaptation of the hit Fox series “The O.C.”  So, they turned one of my all-time favorite movies into an amazing musical, and now one of my favorite TV shows?   I think I love them, seriously. Currently, the show is only slated for one performance at the end of August in Los Angeles, although after the success of “The Cruel Intentions Musical” anything is possible.

If this article hasn’t convinced you to go get one of the last remaining tickets to The Cruel Intentions Musical before its final bow, or to protest to have the show extended (kidding, kind of), I don’t know what will.  If you live in Los Angeles, don’t deny yourself this amazing experience.