Red Bull’s 30 Days in LA kicked off this past weekend with headliners Cut Copy, preambled by Gemini Club and Wrestlers. This was Cut Copy’s final stop on their current album tour, but you’d never guess it with their enthusiasm shining full force for night one of this sweet movement Red Bull’s got going on.

Every night in November you can snag tickets for no more than fifteen bucks to venues ranging from theatres to parking lots, to wax museums.

While we have nothing but good things to say about the performances, the aesthetics of the marketing and the venue itself were unsatisfactory. The idea to have a show in a parking lot is fine, but with a group like Cut Copy utilizing lots of lights and LED displays, a portion was lost due to atmospheric interference. A giant lit up advertisement on the side of the building next-door, distracted from the optical antics on stage.

Not a thing, however, was more distracting than the models hired by Red Bull to play up the energy of the crowd. These robotic girls sat atop muscled guys, grinning and waving their empty Red Bulls, swapping them out for different flavors at intervals throughout the show while hired cameramen swooned and snapped.

Back to the music. If you’ve never seen Cut Copy, it would be a great idea to change that fact as soon as humanly possible. The Australian group is a blast to watch, tying in Dan Whitford’s graphic design roots for displays. These guys have so much fun with each other on stage and constantly interact with and run into the crowd. Though admittedly, the lighting situation could have been better, the energy throughout the vicinity was pretty spectacular. Everywhere you looked people were totally present and smiling with strangers, not just staring into their phones. Major highlights included “Hearts on Fire”, “Free Your Mind”, with the electric and beloved “Lights and Music” closing the pre-encore set.

The peppy hour-and-a-half long performance finished with the stirring “Need You Now”, before the band cheerily walked offstage, leaving the audience with a recording of “Lean on Me”, to which many ceremoniously succumbed. 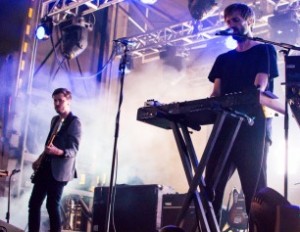 Set List:
We Are Explorers
Take Me Over
Free Your Mind
Where I’m Going
So Haunted
Hearts on Fire
Saturdays
Take Me Higher
Feel the Love
Out There on the Ice
Let Me Show You Love
Meet Me in a House of Love
Lights and Music

Encore:
Nobody Lost, Nobody Found
Need You Now