Press Pass LA had the chance to sit down with Lydia Hull, who portrays Lily Maddox, a firefighter in the Malibu Fire Department on the CW’s new hit show SAF3 airing Sunday at 7pm PST.

“SAF3” (pronounced SAFE), is about an elite division of the Malibu Fire Department consisting of the best of the best in their respective field of sea, air and fire. Lydia portrays, Lily Maddox, whose father was a firefighter who tragically lost his life battling the blaze of the famous South Canyon fire on Stone King Mountain. Lily was only ten at the time of his death, but it was then she knew she would dedicate her life to following in his footsteps.

Actress Lydia Hull got her start at age 15, gracing the covers of modeling magazines after winning the Seventeen Magazine cover model contest.  Once 18, she moved to Los Angeles to pursue her career as an actress. She has since been cast in supporting roles in the films Van Wilder, Sorority Boys, Fire With Fire, Empire State, and Escape Plan as well as the television show, Castle. SAF3 marks the first series regular role for this rising star! 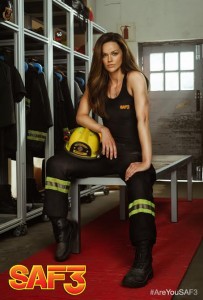 PPLA: This is your first series regular role and it’s on a big network TV show. Tell us what that means for you?

LD:  Well, I’ve been in and out of the industry since I was a teenager. I recently took some time off to get two degrees- an Apparel and Textile Marketing from Kansas State University and Jewelry Design from the Fashion Institute of Design and Merchandising Los Angeles. I started out as a  teenage model, moved to L.A. literally the week after I turned 18 to get into acting. So to come back and to book a series regular on a show, especially one guaranteed 20 episodes to start, is really a dream come true for me.

PPLA: What was it like prepping for this role as a female firefighter both physically and emotionally, as your career deals with the loss of her Dad as the reasoning behind her career choice.

LH: The premise of the show is that my character Lily works for an elite division of the Malibu Fire department called SAF3 made up of firefighters, coast guard, and lifeguard. My character is a firefighter and she lost her Dad at a young age, and he was a firefighter which is why she wanted to go into it because he was her biggest hero. I was pretty thin when I first found out about the role, and I really wanted it so I started working out really hard at the gym. I put on about 15 pounds of muscle and took swimming lessons to brush up on those skills. I have to say that making gains in the gym was really positive for me because I started feeling more confident all around in life. You start out and you can’t really do much, and then every week you get stronger and see improvements and it really did a lot for me both as an actor and personally.

PPLA: This show films in Cape Town, South Africa. What was it like getting to be on location?

LD: I never ever thought I’d go anywhere in Africa let alone live there for a half a year. It was really cool!  We were there during their down season for tourism so it wasn’t too crazy. The hardest thing about filming in another country is being so far away from your support network and your own familiarity. Sometimes, especially after working long hours, it’s nice to come home to your own place. But it was a great experience and South Africa is beautiful.  They have the most amazing beached and sunsets there and just so many natural wonders. It was great to get to take in the culture while filming.

PPLA: Does SAF3 look to real life events for inspiration in their story lines? For example, with the recent Malaysian aircraft disappearance, a story that involved coast guard, military, and an array of rescue crew. Do you find your show, like many others on TV, takes storylines from news occurrences?

LH: Every episode we film is dedicated to a different person, to honor them as a hero for their work. So in that respect, the show pays homage to real life events. I do feel like some of our episodes have been based on real life stories and events as well, but I don’t have the specifics.

PPLA: Now that you are back home and on break, do you have any upcoming plans for Summer?

LH: We were in South Africa during the winter there when it was L.A. Summer last year so I feel like i missed out on Summer so I’m  looking forward to that. Even though the weather is nice here all year round! I am just really enjoying being back in L.A. with friends and family and to have some down time with them.

PPLA: Of all your roles to date, is there a role  (this show or other) that has been your favorite or most challenging?

LH: It was quite a few years ago, but it was the second film I worked on called Sorority Boys which was a big Disney/Touchstone film. It was just so much fun. I don’t know if it was because I was 18 and so excited to have a movie role or not, but it was such fun environment. I remember everything about that experience, and just going to work and thinking this can’t be a job because it’s amazing. It stuck with me all this time because I think this industry at its best should feel that way. I mean, yes we work a lot of long hours, but at the end of the day we are making moves and TV shows and it should be really fun!

PPLA: Outside of acting, what are your passions- hobbies, philanthropy, etc?

LH: I have a jewelry design degree to so I tinker around with basic jewelry, and I also take a lot of dance classes because that’s my other passion. I haven’t found my own personal charity that I am really passionate about yet but I do volunteer with other actors’ charities and events. I’m really into the arts in general. If I wasn’t an actor I would probably be a jewelry designer or dancer or something equally artistic.

PPLA: Anything else you want your fans to know about you? 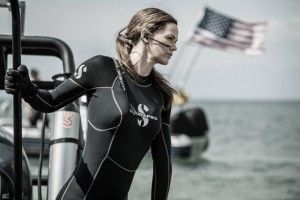 LH: There is one last thing I want to say about the show. It’s a really positive family show. I hope people enjoy it for the action and drama, but also that it’s a nice show for all ages and for families to watch together. The creators of the show and all the actors that work on it set out to make a show that is really positive and honors the real people that do these jobs- fire fighters, coast guard, life guards. These are really honorable professions that are all about sacrifices and selflessness and saving lives, so we hope that people really take that away from watching this show.

Check out the official SAF3 website for a trailer and local listings!