School Night is a tough place for a performer to impress – the overpacked crowd most likely doesn’t listen to your music, it’s a sweatbox, the stage is set low and intimately close to a few club-like tables and a balcony, with fans overlapping on either side blowing cigarette smoke in your face.

A performer like Dagny, however, uses this setup as her personal playground. 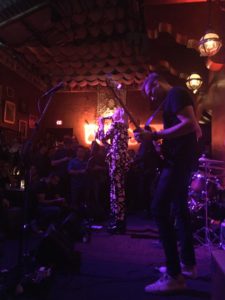 Dagny’s EP Ultraviolet debuted on September 2 fueled by the success of songs Backbeat and BØRNS collab Fool’s Gold. Opening the show with Ultraviolet, it was refreshing to hear a song that brings an almost anthemic chorus in such a small space. It could have easily translated as empty, however the pop lines and drum fills lifted Dagny’s vocals, and it was clear the remaining set would be equally exciting.

While Backbeat was by far the most recognized song of the night, Fool’s Gold brought the kind of performance that demanded attention. Dagny’s confidence on stage brings an element to the music that is lost when you are streaming the song – you can’t look away. Bullet, the newest track not on the EP, was even further proof that something special is bubbling up around Dagny – it’s time to take note.

For more info on Dagny: