Duos in the Country music atmosphere seem to be the new thing. Florida Georgia Line, Thompson Square, Maddie & Tae…the list goes on and on. So what makes Dan+Shay different from all the rest?

The kick off of their first show on their first headlining tour at the sold out El Rey Theater in Los Angeles, California was no less than memorable for the dynamic duo. Ryan Kinder pumped the crowd up with his opening set. When it came time for Dan+Shay to grace the stage, the energy could literally be felt in the air. Fans in the front row were decked with neon glow bracelets, light up posters, and iPhones galore – and they weren’t afraid to use their vocal chords to show just how much they were loving the show. Dan+Shay played through their full 12 song album, Where It All Began. They also sang unreleased fan favorite songs, and covers of hit songs, including “Pour Some Sugar on Me”, “Moves Like Jagger”, “Dynamite”, and “She Looks So Perfect”. No matter what genre is being sung, it sounds incredible coming from these two. 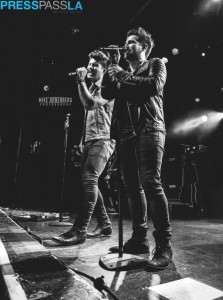 The peak of the night definitely was when they ditched the microphones and got intimate with the fans. Dan+Shay quieted down the crowd and had a sing along to “Can’t Say No” – with no help from the sound booth. An undeniable chemistry between the two is part of what makes them stand out. Throughout the night Shay Mooney showcased his talent with astonishing vocal runs and a killer air guitar. Dan Smyers is a pro on the (literal) guitar and providing a softer, deeper tone to the songs. Interacting and being goofy with the fans was an obvious treat from the boys, but they got a treat from the fans as well. Ending the show with their hit single “19 You + Me”, multiple fans surprised Dan+Shay and held signs up for the entirety of the song that said PROUD on them.

After watching this performance, it’s safe to say that Dan+Shay are here to stay – so sit back, “Close Your Eyes”, and enjoy the ride. 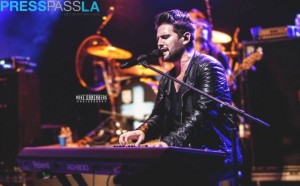