DAN STEVENS STEPS INTO THE SPOTLIGHT IN ‘THE GUEST’

Dan Stevens, a relatively minute U.K. actor known (to most) as Matthew Crawley on Downtown Abbey is currently making a  U.S. splash as a war veteran in Adam Wingard’s thriller, The Guest. And splash does Stevens make! 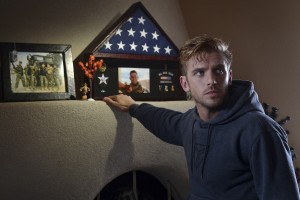 Only a handful of actors can be counted lucky enough to get a role or film that grips an audience so much to be considered a star-making turn. In the past, these roles have been reserved for A-Listers such as Barbara Streisand, Dustin Hoffman or Faye Dunaway, but in the days where ticket sales are waning and more people are going for words like VOD and HBO, rather than AMC – windows of opportunity have opened up wide for lesser known talent to take the reigns. Dan Stevens just does that in The Guest.

So lets get this out of the way now, The Guest is many things: a thriller, an action, a black comedy and an 80s inspired B-movie. Is it good? I’m still not sure if that description can apply here as Wingard seems to aim for The Guest to fall into a category where his film can’t be a definitive black or white answer to good or bad, since much of the film not only discredits most of what people consider good, while also aiming high enough to have excellent troupes which hit an almost sheer brilliance.

Regardless of what The Guest is supposed to be, audiences who have a sense of humor and a penchant for old-school thrillers and slashers but wish to have smart scripts will, never-the-less, walk away with an appreciation of the work which writer Simon Barret and Wingard have created.

In Wingard’s low budget feature that had its debuted at the Sundance Film Festival this past January, The Guest unfolds a story revolving around David (Played by Stevens) – a fallen war veteran who has returned to US soil in hopes of connecting with the family of Caleb, one of David’s army comrades that he lived and trained with. While David’s motives may be unexpected, the solider manages to cover his tracks and odd behaviors with little more than good old fashion charm, politeness and good-old boy Midwestern twang to quickly swoop in and make himself comfy amongst grieving mother Laura Peterson (Sheila Kelley), alcoholic father and defeated husband Spencer (Leland Orser) and the trusting-to-a-fault son & victimized student in Luke (Brendan Meyer). While most don’t question the motivations of our central character, its ultimately the unsettled from the get-go rebel and tuned-out big sister Anna (Maika Monroe) who begins to dig deeper in finding out the true player in David, only to discover something much bigger than she could have ever imagined. 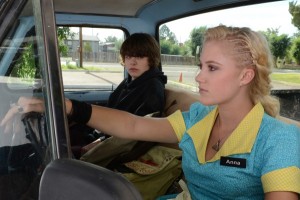 While The Guest is a simple story about a unexpected guest that is certainly intriguing and will grasp audiences with a fine mixture of action, thriller, horror, dark comedy, farce and revenge – its really the spot on performance of Dan Stevens here, which will envelope the audience. To put it boldly – Stevens is smart, intricate, calculated and so turned on that his devious turns in facial expressions alone can make an audience actually turn from relaxed to physically uncomfortable in the blink of an eye; granted, its a slow blink, but a blink all the same.

Aside from his sunny-slasher disposition, Steven’s also displays the ability to seamlessly discharge any thought a viewer may have that the actor isn’t American at all due to his wonderful use of dialect. Please don’t misunderstand – there are certainly some nice performances elsewhere in The Guest as Orser gives a grounded and darkly comical turn on his downtrodden father role, and Monroe’s Anna is a genuine and connected turn away from the A-typically performed roles of high school grads who seem to think that no one understands their place in the World – oh yea – and the fact that the always like-able and bold Lance Reddick (The Wire) portrays a determined government agent is just the right amount of over-the-top to round out Wingard’s cast. It’s Stephens though, that will engross audiences to ask if the actor really is crazy once the credits roll and prove enough to carry The Guest by himself. 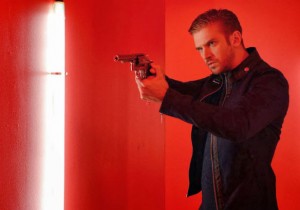 In the end, Wingard & Barret gives audiences a story that is not only intriguing but one that gives openness for interpretation and interactive thought. By combining a driving and eerie synth underscore to harken back to indies such as Donnie Darko, Drive, Nightmare on Elm Street or Halloween – and with the sensory performance which Stevens boldy and chillingly forces audiences to absorb through a Ryan Gosling-esque package, The Guest could be a sleeper hit at this year’s Halloween box office, and Adam Wingard’s step up to a bigger spotlight.