We’re all just trying to get by, aren’t we? Dark Places answers this question with a blood-splattered “Yes” in a perplexing suspense thriller.

Libby (Charlize Theron) is the only sister of the bunch that seems to “get” Ben, her otherwise misunderstood brother. Plagued by the need to fit in, Ben practices satanic rituals with the wrong crowd, including a girlfriend who’s got manipulation down to a fine art. When the town starts gossiping about Ben, it creates an undeniable tension that only Libby can, quite effortlessly, relieve.

Why then, after being a witness in the Kansas Prairie Massacre, which occurred in their own household, would Libby claim Ben as the murderer? It put him to jail for decades. We’re baffled to find out what the hell happened that night anyways, and find we’re not alone. The Kill Club, a secret society dedicated to finding the truth to murder cases, hunts Libby down over twenty years later and makes her an offer she can’t refuse to revisit the case.

And the ride begins.

A heartbroken schoolgirl sets a sexual scandal rumor off about Ben, and the town goes wild, backing Ben into a corner built of unfair judgments and flat-out lies. Ben is nearly suffocated by the gossip, which in fact does much more harm to every other member of his family. This includes his brave mother (Christina Hendricks) who is willing to give up everything just for her son whom she too isn’t even sure she trusts. The suspense builds, the massacre goes down.

We trudge an uncomfortable trail to the truth, from the depths of their father’s current residence in a toxic waste dump, to the backwoods which houses a key player in the mystery who was not killed, but went missing after the massacre. As we collect breadcrumbs of truth from each of these characters, we see that the Kill Club’s ideas on Ben’s innocence might not have been so off in the first place. Plus, we meet a long lost daughter along the way for an off-putting and totally weird twist. 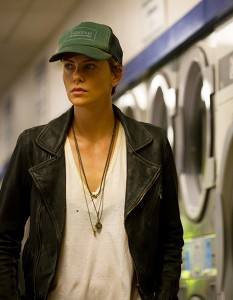 The film questions evil nature as we see the most horrendous outcomes materialize from fear-driven attempts to actually make things better. It’s enough to make you wonder, “Does pure evil really even exist?”

Find out if Ben is jail-bound forever, if Libby is a liar and how the Kansas Prairie Massacre may have just been an attempt to make things all better.  Warped. But good enough to stay tuned into in a big dark place like the Music Box Theatre in Chicago where I watched it debut. Give it a whirl.