Dave Matthews Band will celebrate its 25th anniversary with a special hometown benefit concert at John Paul Jones Arena in Charlottesville, VA on Saturday, May 7.

To express its gratitude for the incredible support the community has provided from the beginning, the band will donate all net proceeds from the concert, totaling over $1 million, to charitable programs in the Charlottesville area via its Bama Works Fund.

In 1999, Dave Matthews Band established the Bama Works Fund at the Cha 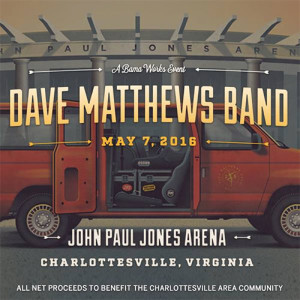 rlottesville Area Community Foundation and has subsequently contributed a portion of each concert ticket sold to the fund. To date, the fund has raised more than $40 million and made over 1,300 grants, primarily to charitable programs in the Charlottesville area community. It has also responded to a variety of national and international needs.

An online ticket presale for the May 7 show will begin on Wednesday, March 23, at 10am ET for members of the DMB Warehouse Fan Association.

Citi is the official credit card of Dave Matthews Band 2016 tour. Citi cardmembers will have access to presale tickets to this show through Citi’s Private Pass Program beginning Tuesday, March 29, at 10 AM ET.

Tickets will go on sale to the general public on Friday, April 1, at 10 AM ET.