Thanks to Creation Entertainment fans of MTV’s Teen Wolf were given the chance to experience the show’s magic up close and personal in Chicago June 28-29, 2014. It was a weekend packed full of fun, laughs, celebrity guests, panels and more. 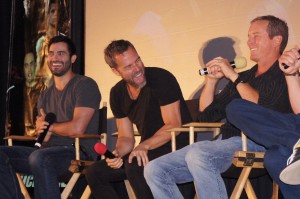 Saturday opened up the festivities of Days of the Wolf Chicago. Orny Adams, master of ceremonies and coach on Teen Wolf, was the first on stage. He did not disappoint. With his signature comedy there was never a dull moment. Adams hosted all of the events and when not on stage was out greeting and getting to know fans in the vendor’s area.
When asked why he thought coach seemed to be the only one on the show who didn’t know about werewolves (and everything else that goes bump in the night in Beacon Hills) he responded, “I have this theory that Coach has existed for hundreds of years and that he’s seen it all before. His superpower is that he JUST DOESN’T CARE!”

He then went on to explain his idea of the perfect episode of Teen Wolf , if only the producers would make it. “The episode would open to a shot of Coach getting out of bed and you would see the back of a woman’s head and her arm. Then Coach would go outside for a morning jog and as he was stretching the camera would pan to his house, go under his porch and show a tied up and gagged Stiles (Dylan O’Brien). The entire rest of the show would be Coach going about his day oblivious to every supernatural thing that was going on under his nose. It would be hilarious!” The entire convention went off of the tune of comedy and kindness that Orny set.

All celebrity guests had a panel, photo-op, and autograph session that they participated in throughout the day they 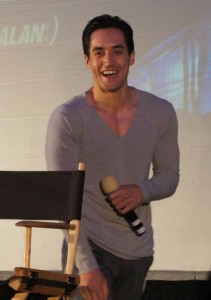 appeared. Everyone who had bought a ticket to the convention was able to be a part of the panels. Each panel was open to questions from the fans. With microphones set up on each side of the stage, questions would be answered in a back and forth manner.

While this was a great way to be interactive with the fans it also made it hard for some people to actually see the guests face because depending on which side of the stage the question had come from, the guest would usually face the fan leaving the other side of the stage to look at the back of their head. Creation did try and remedy this by having the guest projected onto a big screen behind them and while seemingly a great idea, with the lights turned up so fans could see the guest on stage; it was difficult to view the screen due to the brightness thereby just making it a distraction.

This was the only minor problem with the whole weekend. Photo-ops done by a professional photographer (Chris Schmelke) and autographs let fans get even closer to their celebrity idols. While not included in most of the tickets (autographs were included in Gold and Silver tickets only and photo-ops were separate for everyone), these extra add on items were well worth the price. The experience of the up close and personal time via photo-ops and autographs saw many a fan walking away in happy tears because they were able to hug/speak with and create an amazing and personal memory with someone they watch weekly on television. Prices for autographs ranged from $20-$50 and photo-ops from $40-$75 and were available for purchase prior to and at the convention. 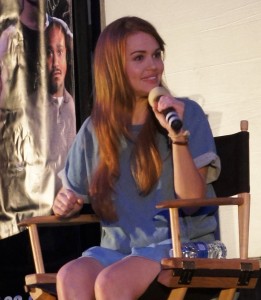 Celebrity guests tried to answer all questions asked of them without spoiling the upcoming season which had premiered only a week earlier. Some juicy tidbits (that were able to be spilled) included the news that we would learn more about banshees and Lydia’s history as well as confirmation that a relation is brewing between Sheriff Stilinski (Linden Ashby) and Melissa McCall (Melissa Ponzio).“I can tell you this,” Linden said, “there is but it is a slow burn.”

On top of the background on banshees, Holland answered a question about her love life in the coming season after the death of her boyfriend Aidan (played by Charlie Carver’s brother Max). “Her best friend just died (Crystal Reed) and the boy that was always there and in love with her (O’Brien) has moved on. She’s just trying to cope; romance is not very high on her list right now. She does get a new ‘trinket’ but nothing serious and that’s all I can tell you.” Not much else was shared but it was amusing to watch the actors try and explain the new character of “The Benefactor” without really explaining it. Mostly fans just got a vocabulary lesson and the definition of a benefactor given to them over and over again.

All in all the weekend was a roaring or rather “howling” success. Fans, volunteers, and celebrities alike seemed to have fully enjoyed the experience. While there were a few hiccups with timing (due to filming and flights), the weekend went off without a hitch. The atmosphere, the layout, the guests, and the events gave all who attended memories that will last them a lifetime or at the very least until the (hopeful) return of the Days of the Wolf convention in 2015!