DC’S LEGENDS OF TOMORROW HAVE ARRIVED!

The long-awaited premiere of CW’s Legends of Tomorrow, a spin-off of its two other highly popular DC Comics adaptations, Arrow and The Flash, has finally arrived, and it has landed with meteoric impact. So, without further ado, let’s get down to it, shall we? WARNING: Spoilers ahead!

It seems no expense was spared on the production–similar to its forbears, Legends of Tomorrow boasts an impressive amount of effects spectacle, layered with just enough human drama to keep it from spiraling out of control into cartoon territory. From the opening shot of the devastated London of 2166 to the battle royale between our heroes and the antagonist Chronos, the “temporal bounty hunter” at the climax, each shot featured enough eye candy to fill a season’s worth of Arrow episodes. 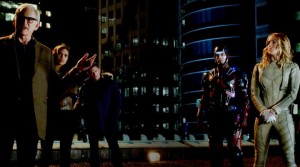 Worlds collide on the CW’s Legends of Tomorrow.

If only the show would have taken as much care with its cast–it wastes no time in plunging the viewer directly into the story, but it runs the risk of becoming bloated with such a large roster of (rather intriguing) core characters. Some, like Captain Cold (Wentworth Miller, still brilliantly chewing the scenery as he did on Flash and Arrow) and Heat Wave (Dominic Purcell, having far more fun than he did as Drake in “Blade Trinity”), as well as Professor Stein (the always-solid Victor Garber) and his symbiotic partner in Firestorm, Jefferson Jackson (Franz Drameh, who seems to be channeling Kirk “Sticky” Jones of Onyx and Blade: The Series fame), have an easy, odd-couple style dynamic that makes each pair pop off the screen and establishes their unique personas.

Others, like White Canary (Caity Lotz, somewhat of a cipher), Atom (Brandon Routh, clearly more suited for the role of tech geek Ray Palmer than for the Son of Krypton), and the leader of our rag-tag crew, the desperate and renegade Time Master Rip Hunter, come across as rather vague. Of those, Arthur Darville as Hunter shows the most promise, with his stylish gear, high-tech TARD–uh, timeship the Waverider, quick wit and slightly grumpy manner (apparently, he took copious notes from his time on Doctor Who).

Meanwhile, Ciara Renée and Falk Hentshcel are just dripping with chemistry as the time-crossed lovers, Hawkgirl and Hawkman, and they are gorgeous to look at whether garbed in their super-suits or in plainclothes. As for the big bad, Vandal Savage (Casper Crump, looking as if he’d stepped directly from the pages of the comic books that spawned the character), he exudes the requisite amount of menace and brutality needed for the audience to properly boo and hiss at him, and is given just enough backstory to make viewers intrigued with the motives behind his villainy. Hopefully, future episodes will not suffer from the hasty setup mechanics that were (somewhat necessarily) employed in the pilot episode and each character will get his or her own chance to develop properly.

A few bits and set pieces were standout–Professor Stein drugging Jefferson to convince him to go along on the time-travel adventure, a la Mr. T on the A-Team, Stein and Ray Palmer/Atom geeking out on the Waverider (looking for all the world like the Millennium Falcon), and the brawl between the more violent members of the crew and some locals in New Orleans to the tune of “Love Will Keep Us Together” by Captain and Tennille were among the more entertaining. As long as the writers adhere to the “show, don’t tell” rule a bit more often in the future, rather than relying on the amount of exposition on display in this pilot episode, the show should exhibit healthy signs of growth. All in all, the Legends of Tomorrow pilot was a solid and entertaining first outing with just enough potential to warrant watching future episodes.