In the new series, My Dead Ex, starring Katherine Hughes and Ryan Lee, two teenagers navigate an interesting journey in your classic romance story….or is it?

They say that nothing can stand in the way of true love, but what if death takes on the role of devil’s advocate…. Does love still stand a chance?  Wait, one of the love interests is literally a walking dead guy. But what’s death when there’s love right?

AwesomenessTV’s My Dead Ex, follows high school students Charley (Katherine Hughes) and Ben (Ryan Lee). The two were childhood friends but drifted apart with age, as Charley became a free-spirit pretty girl and ben went down the “annoying friendless nerd” path. Stuck in the past, when the two were a couple back in fourth grade, a fact that Ben nor his mother will let Charley forget, the pilot begins with Lee’s character attempting to ask out his childhood girlfriend Charley, for the 56th time. 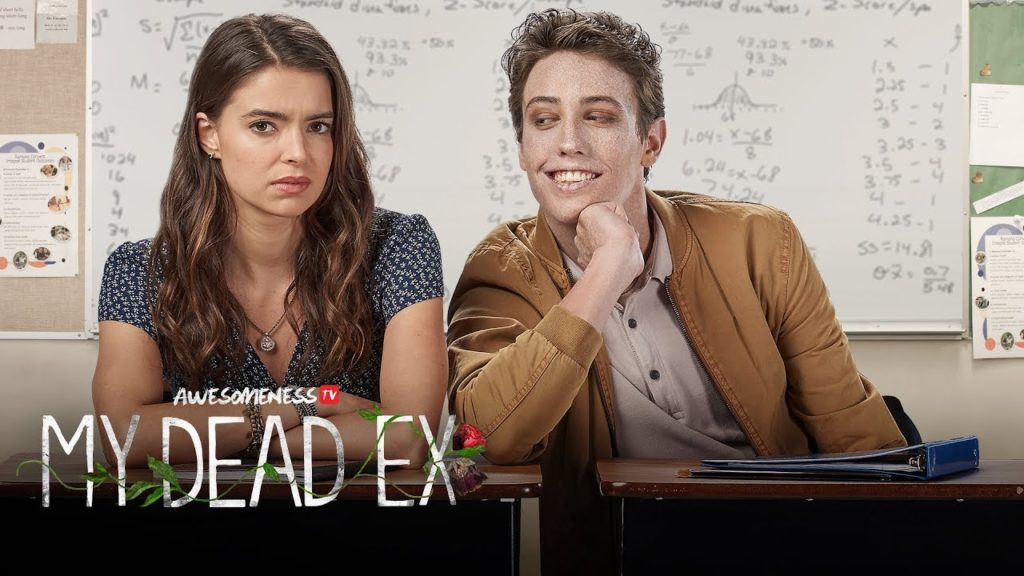 In the opening scene, Charley, who is joined by her best friend Wren, played by actress Medalion Rahmi, gushes over her love for a popular boy at school named Bryce, played by actor Gavin Leatherwood, when Ben approaches and shoots his shot once more. “Will you go out with me?” he asks, and is made fun of by Wren, a sharp tongued queer girl who gives off a “too cool for school” vibe with her “fuck this” attitude. She tells Ben to give it a rest with all his desperate attempts, and to both their surprise, Charley reluctantly says yes to her old best friend. She agrees to let him take her on a date, under the condition he will never ask her out again.

From this moment, the plot is quickly kicked into action. Arriving at Ben’s house, Charley is directed to the backyard of the house, where Ben is awaiting her arrival in a tux while the violinist he orders plays a romantic melody, met to set the mood. Charley is instantly annoyed that Ben blew her agreement out of proportion. She sits down and rolls her eyes at the elaborate decorations and excessive effort of an evident attempt to impress her. Despite her “let’s get this over with” mood, Ben, ever so optimistic, details his genuine love for her over the amazing grilled cheese he’s made for them to eat.

Once back in her bedroom, following the date, Charley seems pleased that she has rid herself of Ben once and for all, seeing that her part of their bargain has been satisfied. She is recounting the “wretched” details of the evening’s occurrence to Wren when she gets a call from Ben, who is yelling over loud wind. He tells Charley he is doing something special for her because he loves her so much but can’t tell her because his actions are a surprise. It is later that night Charley finds out her not so secret lover Ben has been killed, plunging to his death while spray painting a billboard, during his attempt to impress her. Ben’s death annoys Charley but also makes her sad.

Viewers then receive an explanation at the title, when “supposedly dead” Ben, shows up in Charley’s house later that night, very much alive… and zombified? His skin is pasty white, his clothes; riddled with dirt, and he seems to be sluggish in appearance.

After a series of events, the two find out that Ben’s “Jesus like” rise, was made possible by two necklaces the pair have possessed since childhood. The necklaces, a gift from Ben to Charley, given to him by a woman who claimed they had a magical love spell inbuned in them. This said magic is responsible for Ben’s mortifying return. But wait, there’s more. Not only does Ben defy the laws of reality by cheating death, him and Charley must always be within 30 ft of one another, or Ben will feel unbearable pain. Wren’s comment “you can’t rid yourself of dog shit once you step in it,” replays in Charley’s head as she panics at their entwined fate. 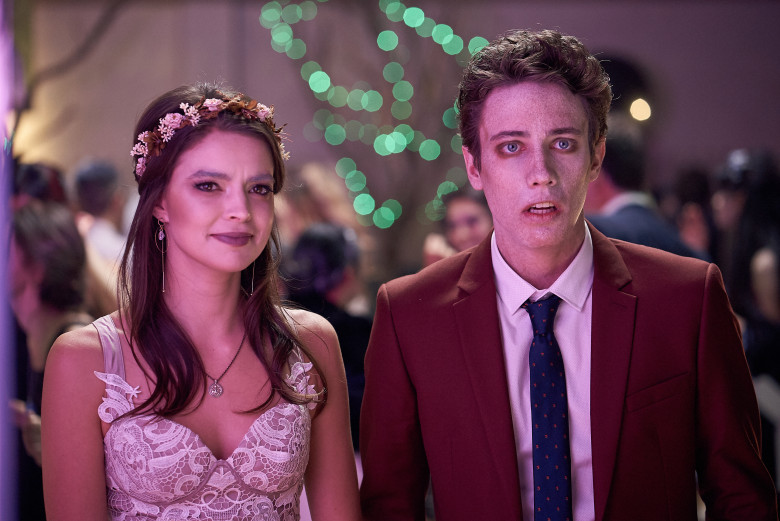 From here, the 8 episode season conveys a mission to find this woman and inquire a means to break this spell, most of the yearning deriving from Charley who can’t imagine being this close to ben, who is beyond content with their current situation. Moving forward the two rekindle their childhood friendship while realizing their love for one another may stretch past just platonic connections, again deriving from Charley, as Ben has never hid his affection for her. In this romantic comedy series, we get to see a determined boy jump through hurdles in his pitiful while romantic strive for her reciprocated attention. Viewers get to see Charley realize that she has been in love with this boy for much longer than she thought, and it took the force of death to prove her feelings for the “friendless nerd,” true. It is a sweet, yet comical account of a typical teenage love story, except the fact that Ben’s dead.

Catch a brief Q&A below with actors Katherine Hughes and Ryan Lee:

PPLA: Described as your classic, will-they-won’t-they romance story, how is the premise of My Dead Ex different than similar story plots? What makes this new series distinctly unique?

KH: “This story plot has been seen in many variations, but he’s dead and it makes the storyline very interesting.  I think it should be interesting to watch the whole living/dead thing with the added undertone of romance”

PPLA: What were your initial thoughts when you were asked/picked for this role? How does your character contribute to the fabric of the plot?

RL: “I was super excited to get to audition, and to get the call back for the role was just amazing. I mean I was ecstatic; my character Ben has been focused on this budding love with Charley his entire time. I think it brings about a sweet vibe to the show.”

PPLA: If you could describe the ambiance of the show in three words what would they be?

KH: “Morbid. Earnest. And my favorite is that it is also very self-aware, which contradicts with it being earnest, but the cast and the show work together to sell it.”

PPLA: Do you think a show like My Dead Ex will resonate with a wide audience? Why or why not?

RL: “There is a character in there for everyone. I think the uniqueness of everyone’s character and the things they bring to the show really meld well, and I think that everyone will find something they can resonate with. I love bringing my personality to the character, and I’m sure people will see that in all the actors.”

PPLA: What are you excited to see as a result of the new series?

KH: “I just hope that people really really like it and that it can be renewed for more seasons, and that everyone spreads news that it’s the best thing that ever happened, cause that’s how I felt coming to work every day.”

Be sure to catch My Dead Ex, available on Verizon’s streaming platform go90!