The public’s fascination with Hollywood doesn’t end at the borders of Los Angeles, or even California, or the U.S. for that matter.  A- list appeal is international and as far reaching as Australia. We sat down with one of the land down under’s top reporting transplants, Aussie entertainment journalist Dean McCarthy to discuss. 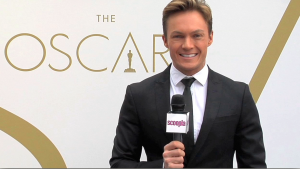 Dean reports for Beverly Hills Lifestyle Magazine and recently interviewed famed director, Quentin Tarantino for the latest cover issue. In addition, McCarthy reports for  Scoopla which airs on 2DayFM & Southern Cross Ten nationally in Oz. Dean originally started as the movie reviewer for Labby, Camilla & Stav on B105 and now regularly crosses to Labby, Stav & Abbey from the red carpet from major awards shows in Los Angeles like The Oscars, The Emmys, Golden Globes, MTV Video Awards and more.  In addition, Dean is also an advocate of the Gay Community and hosted the San Francisco Pride national USA telecast this year which received a local EMMY Nomination.

We sat down to chat with Dean about what it’s like coming from Brisbane and now covering some of the biggest events in Los Angeles, including this past week’s Horrible Bosses 2 premiere where he chatted on the red carpet with star Jennifer Aniston.

PPLA: What celebrity interview had you the most nervous?

DM: Definitely Tom Hanks. I interviewed him at the Captain Philips premiere in NYC and I was so nervous because he is a Hollywood legend, and I’ve always been a huge fan. He was just as funny, charming and down to earth as you would expect. I met him again in L.A. a few months later and he actually remembered our interview!

PPLA: How obsessed with celeb culture is the Australian audience? Are there certain stars they can’t get enough of? Stars they are totally overlooking?

DM: Australia is celebrity obsessed and the biggest stars of all are the Kardashians. The Aussies lap it up! I find myself reporting on the Kardashians almost daily because our audience can’t get enough. When Kim K heads down under, she is absolutely bombarded by fans and Aussie Paparazzi. While Australia likes most of the popular American artists, they particularly love Pink. She’s sells out tours every time she heads there. She holds the record of Most Australian attendees of all time. They love her.

DM: I asked a very famous Hollywood actor about his, “Absolutely gorgeous Australian girlfriend” and he responded, “We broke up this week”. The look on his face said it all really! I was also interviewing Christian Bale once for a closed circuit network for one of the big American retail stores, and the first thing he said was how that retailer ‘sucks the life out of small business’. That was particularly awkward, to say the least.

PPLA: What are your long term goals as a host/reporter?

DM: I love being the Aussie Hollywood insider, so I particularly enjoying reporting for Australian outlets. I would love to expand on that and work at a U.S. entertainment news program as well. That is a huge goal I am working hard at. The ultimate dream though, is my own entertainment news TV and radio show.

PPLA: You hosted the San Fran Pride event this year which got an Emmy nom, tell us about that experience & what it meant to you? 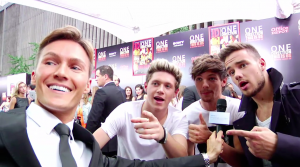 DM: This is one of my most proud presenting roles. The SF Pride Live team consists of an extremely talented group of people and we work together to deliver a live telecast of one of the biggest pride parades in the world. Knowing that we are allowing people all around the world the opportunity to experience the magic of this parade and to see the celebration of love and equality, is very special to me. The event brings people together and it touches, moves and inspires us all.

PPLA: You’ve covered many awards shows, do you have a FAV & why?

DM: Every year I cover the Nickelodeon Kids Choice Awards and I think it is my favorite – simply because it’s the most fun. The orange carpet is lined with hundreds of screaming kids and the celebrities are relaxed and enjoying themselves. Some huge names attend and the atmosphere and energy is so electric – I just love it.

PPLA: What was it like sitting down with Jennifer Lawrence for the Hunger Games?

DM: Jennifer is one of the most delightful, humble and down to earth people in the industry. Before I walked in the room I was nervous – she is such a huge star. But the moment I entered, she stood up and greeted me warmly. We had the best interview ever. We laughed, shared stories and even talked about her new hair cut. It was like hanging out with a good friend. Her impersonation of the Australian Accent is one of the best I’ve seen!

PPLA: Any advice to others who want to follow your career path? 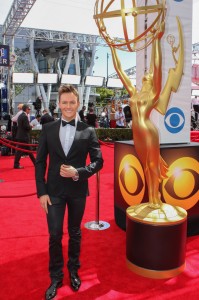 DM: It is such an exciting career and it allows you to meet some of Hollywood’s most interesting people. Because of this, it is very competitive. It’s important to work hard and stay focused – you really need to be on your game, all the time. I keep a running list of “learnings” and I look at it often. It means that each time I learn something (sometimes the hard way), I am constantly growing and improving with each interview. So, work hard and constantly look to be improving your skills.

Look out for Dean on red carpets throughout this awards season!