I had the chance to visit The Glass House in Pomona, great city by the way, quiet, calm and clean. I witnessed acts from three great bands that spilled their hearts out performing on stage for an audience that loves their music and enjoys every lyric.

As I walk in to the venue, I could not help but notice the hipsters being mesmerized by Dekades’ performance. The crowd that was attentive as they witnessed Arden Fisher sing her heart out with such powerful voice, accompanied by the talented fusion of musicians. Artists like Chris Cano who feels the vibrations of his drums as he bangs on them and hears the heavy ’90s guitar riffs of Josh Benson and Matt Shors.

The bassist James Carter would slap that bass and all in unison create this beautiful synchronized industrial heavy rock. Lyrically talented and not afraid to pick up the guitar Arden Fisher sings like a gospel girl who would rather play rock and roll!!!

Artists like them play for passion, recognition and simply because they have that talent unlike others. There is always an additional performance on a night like this, it’s Friday and Lost in Society goes up on stage. This electrifying trio sets the stage and destroys it with its punk beats and angry lyrics.

Their acts in festivals like Vans Warp tour and others have landed them amazing reviews, but seeing them live and witnessing them punk-out shows a promising future for the punk scene. Soon after their short set, and I mean it in a good way, Dead Sara rocked the stage. Once I saw band members of Dead Sara walking around the venue, I knew then they were in it for the music. Emily Armstrong rocks on stage like no other female rock band singer. Emily leads this band like Robert Plant and plays guitar like a goddess. Her voice is extreme but can adapt to the folk/blues style of Siouxsie Medley and the band just exhilarates on stage. 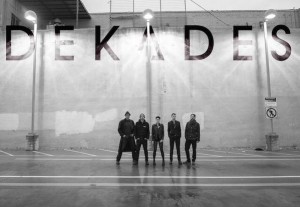 Listen to their music and it gives you a feel of the 70s rock scene. The fans jump up and down as Dead Sara plays their heavy riffs and go from whaling vocals to talented singing sirens. All in all A great dynamic show and their music is now proudly listed on my playlist, rock on and keep it heavy!