A man of the people, Washington greeted hundreds of screaming fans lining the street at the historic Arlington Theatre. Stopping for conversations and photos along the way, he made many dreams come true.

SBIFF Executive Director Roger Durling began the evening with a short introduction to esteemed film critic Leonard Maltin, whom then brought Washington on stage to a thrilling standing ovation. Humbled and excited, Washington paused for a moment to take it all in.

During the 90 minute candid conversation about Washington’s career, when asked where is his Oscars live, the self-acclaimed “theater snob” joked that, “they live next to each other with their three buddies from the Golden Globes.” Washington continued, “but they miss their Tony in New York City.” The audience was in a fit of laughter.

Although there were many light-hearted moments and banter between the audience, Washington expressed the importance of not only asking for help, but accepting it along the way. “I tried to BS my way through directing, but Warren Beatty helped me understand I could do it.”

As clips from Washington’s 35 year career played throughout the evening, Maltin and Washington continued to discuss the impact and support Washington has been given throughout his career. He even exclaimed he did a cartwheel in the middle of shooting a Philadelphia scene noting director Jonathan Demme gave him “room to breathe.”

The evening concluded with Fences co-stars, Stephen McKinely Henderson and Saniyya Sidney presenting Washington with the esteemed award. Washington crossed the stage to accept his award to another enthusiastic standing ovation. As he said in his red carpet interview to a group of local high school students, “The best advice I can give is this: fall down seven times, get up eight.” 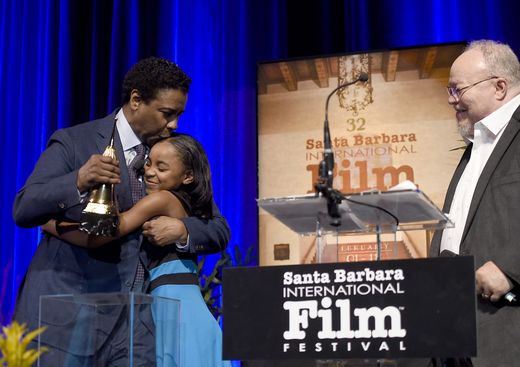