DISNEY BRINGS MAGIC TO THE SCREEN WITH THE PIRATE FAIRY

Disney is continuing the tradition of Peter Pan with a story that continues the tale of Tinker Bell beyond the J.M. Barrie story of Peter and Wendy. The Pirate Fairy is the fifth film from the successful home media series.

Press Pass LA was at the red carpet premiere of the film and we got the inside scoop from the celebrities attending the big event. Singer Natasha Bedingfield, who performed the original song “Who I Am” in the film, talked about being a part of the Disney legacy. She said, “It’s really wonderful especially standing here on the Disney lot which is where the original offices were. I love it. I love Disney movies, so it’s a great feeling to be part of one.”

For director Peggy Holmes and producer Jenni Magee Cook, the release marks another big triumph for women in animation since the two helmed the film. “I’ve been in animation almost 19 years and there’s always been a really strong female force in there. I think it is getting recognized a bit more these days. You need that merge of both the male and female experiences to build really good and emotional stories,” said Cook. With the emergence of women in animation, comes more female heroines onscreen as well. “Here at Disney, we tell stories we want to tell. There’s no agenda. Naturally with female directors, maybe there’s more female characters that feel relatable,” shared Holmes.

For celebrities attending the movie premiere, the magic of Disney is a big part of their lives whether they are young or old. For the stars of the upcoming Disney Channel series, Girl Meets World, Rowan Blanchard and August Maturo, Disneyland is a favorite weekend spot for them. “I have to go on Calfornia Screamin’ and Hollywood Tower of Terror,” said Blanchard. For 6-year-old Maturo, he agrees about jumping on the thrill rides. He explained, “I like the Tower of Terror.” Eva Bella, who voices Young Elsa in the monster hit Frozen, told Press Pass LA her favorite moment in the original Peter Pan animated film. She said, “When they’re riding along in the air and Peter Pan is showing them everything.” 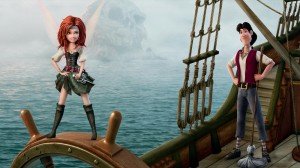 However, it was former Dancing With the Stars host Samantha Harris who took the timeless approach when it comes Disney films. She brought her two young daughters to the event to share in the magic that the studio always brings to the table. Harris said, “I’m looking forward to sharing the movie experience with them. This is kind of the experience that I know that when they are Disney or Tinker Bell, [they] are always [going to be] perfect for their ages and there’s nothing too scary. It’s just a lot of fun.”

The Pirate Fairy will be released on home media beginning Tuesday, April 1.