DISNEY BRINGS THE ANIMAL KINGDOM TO LIFE IN THE DAZZLING ZOOTOPIA

Disney films have seen a recent uplift in quality within the past couple of years and that doesn’t stop here. While Zootopia doesn’t have the audience laughing the entire time, it does keep movie goers genuinely interested by taking them into a unique, animal-ruled world where anyone can be anything.

The movie begins with Judy Hopps (voiced by actress Ginnifer Goodwin), an eager and judicial bunny following her dreams to become a police officer. Her trials and tribulations include overcoming the common stereotype that while bunnies are cute, they shouldn’t aim to be much more than a carrot farmer. This is where the subtle humor comes into play. Parents and young adults will love the jokes targeted at mature audiences. For example, Judy’s parents try to dissuade her from following her dreams and “settle” instead, because they settled and they’re quite content like that (sound familiar?). Insert a few Breaking Bad and The Godfather references and you’ve got an enjoyable movie for audience members young and old. 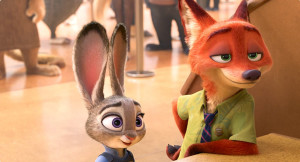 Ginnifer Goodwin and Jason Bateman lend their voices to the imaginative Zootopia.

Fast forward to graduation day, Judy has worked hard to complete her police academy workload and is assigned to the metropolitan city of Zootopia. The introduction to the city and its nine districts, all varying in climates and animals, and additional predator and prey characters is mesmerizing. The various districts, such as Tundratown, The Rainforest District and Little Rodentia, all reflect various climates, building structures and transportation. For example, inhabitants in The Rainforest District move around their vertical environment via walkways, bridges and gondolas, while Tundratown features floating blocks of ice instead of cars.

Seeing this world will automatically make you want to visit and explore the different areas and see the animals living somewhat peacefully together. The details shared throughout the movie also display the amount of research done by directors Byron Howard (Tangled) and Richard Moore (The Simpsons). After exploring Africa, talking with animal experts and visiting Disney’s own Animal Kingdom, they were able to create a magical yet believable world where animals rule and build their own city to their standards.

Audience members get to explore the various parts of this world as Judy does. Assigned at first as a meter maid, she soon maneuvers her way into an active missing animal investigation despite Chief Bogo, a tough cape buffalo and commanding officer, objecting. But, she is given only 48 hours to solve the case or she must resign. This introduces the reluctant, sly and clever Nick Wilde (voiced by actor Jason Bateman). The pair begin an adventure that ultimately brings out and dissolves the various stereotypes between predators and prey.

But don’t worry. There is no cheesy moral underlying theme. Rather, the movie is used as a forum for examining stereotypes. You soon find out that while Judy, a country bumpkin bunny is fighting her own “cute” stereotype, so are predators. The story naturally lends itself to this theme without becoming irrelevant or forced. Throughout this process you also explore the seedy portion of Zootopia, including a nudist colony (get excited for a voice cameo by Tommy Chong), mafia wedding and now closed Natural History Museum.

Overall, the world Howard and Moore created is fascinating, well-thought out and lends itself nicely to an already impressive story line. The insertions of adult-targeted humor and an impressive cast is just the cherry on top.

Adults and children alike should be lining up to see Zootopia, out March 4th.