DISNEY PIXAR’S ‘INSIDE OUT’ HAS $90 MILLION OPENING

Press Pass LA was at the premiere of Disney Pixar’s “Inside Out” and caught up with cast members Amy Poehler, Bill Hader, and Mindy Kaling. 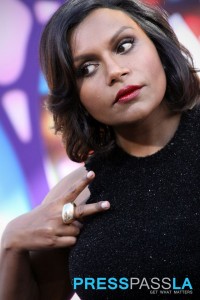 Not only did the cast do an amazing job as voices for the film, but they also kept us entertained on the red carpet. Bill Harder had us in tears laughing, while Amy Poehler’s and Mindy Kaling’s amiable and comical presence was definitely unforgettable.

“Inside Out” ventures into the mind of 11-year-old Riley, where five Emotions are hard at work in Headquarters, led by optimist Joy, whose mission is to keep Riley happy. Fear heads up safety, Anger ensures all is fair and Disgust prevents Riley from getting poisoned—physically and socially. Sadness isn’t quite sure what her role is. When Riley’s family relocates to a big city, the Emotions help guide her through the bumpy transition. Suddenly, Joy and Sadness are swept into the far reaches of Riley’s mind, and Fear, Anger and Disgust are left in charge of Headquarters. Joy and Sadness must find a way to get back to Headquarters, and Riley. 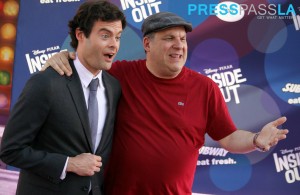 The film opened this weekend to a huge box office of more than $90 million. This places the film at the top with the biggest opening for an original movie in history, beating the previous No. 1 original movie “Avatar.” The film continues to be well received among audiences and critics alike. If you want to watch a movie that will keep you entertained from start to finish check out “Inside Out,” at a theater near you.