DIVIDED HEAVEN: THE LINE BETWEEN THE ROAD AND THE SHOW

When the sort of art you make and the way you make it are as much about the song and dance as it’s reactions, the puns are always intended. Those wind whipped days and exhausting run around mornings leave us all a little bit kicked around and left for dead. So when you have to write about it, you ask yourself seriously, is anyone going to listen to your message the same way you wrote it?

For tired and heartfelt musicians, it is an all encompassing tale of concurrent catch-22’s. The music you play on the road is what got you on the road, but in order to write more music, you can’t help but write about what you’ve known for more time than you care to remember, the road. That my friends, is the rub of a tour and album existence. The monotony in long spurts between highs of playing shows. Even further the monotonous hate you have for being on the road while you’re out there, only to miss it when you’re not. This sound rings true for the Los Angeles based acoustic punk band, Divided Heaven, and their second album, Youngblood.

As evidence, the common denominators throughout this whole album are the subtle ramps and vamps, background harmonies, quick rhythm changes on the acoustic and large space reverb with mewl tinged lyrics about love lost, semi- political consumerism, road weary life goggles, and the constant pressures of getting older while following a dream. The title track, Youngblood, exhibits some of these, but the rest of the album has some great individual examples of all those attributes on a one by one basis, but none as a whole. Like the songs “KATEISWAR” and “P.Levi” with their vamp like choruses and ramp ups to a pop punch of a lyrical grappling with the life of an artist. The latter, “P. Levi,” being a catchy breakthrough about following yourself out of despair and into your own art. It has a lyrical integration of a political push while still talking about chasing an aspiration and using your talent as a weapon.

The real catch in all the songs seemed to be two songs in the middle-ish of the album that, in all hope, will not get buried. “Musser Park” and “Crooked Smiles/Brutal Miles.” The former is a great exhibit of the importance of rhythm and the changes that can be made with just the littlest hints of movement, whether they’re added by vocals or repeats that catch the ear during all of it. Again, the lyrics hint at the prostrated feeling that is life on and off the road, and the inability to keep anything long term due to its uncertain dates. The latter, “Crooked Smiles/Brutal Miles,” has some of the most honest of feelings to it. It’s unconventional harmonica slap, which is down right almost blasphemous for the genre, makes it a small standout. There are some tunes on the album that feel a bit more like fillers, especially “The Worst” and “Ego and Nothing More.”

In the end, it all harkens back to the same tie-ins. Of which, push the listener to the more notable closing songs of “Safety-Pinned Heart” and “Gin.” They have their little say about the common burdens of the album’s overall feel, but do nothing to push you along with something new. While, some of the better lyrics on the whole album come from “Gin,” in which Divided Heaven seems to speak to itself, “We grow tired of this foolish ship, we’ll strip and dive right in, we could cheat just like the movies when reality breathes stale, but I’m too young to plan too old to fail.” 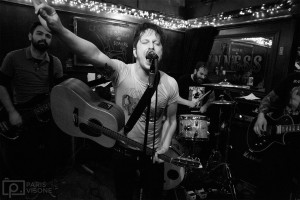 Now, what do you think it’s like for those entertainers who travel, day in and day out, to bring us our particular brand of pseudo-ironic popular music? If you listen to Youngblood, you’ll get a good whiff of the idea, but overall the sophomore effort could have killed it with a bit more diversity in sound and a more focussed punch. A good album to have in the catalog when you drive, but not an everyday listen.