Press Pass LA was on the red carpet for the premiere of Dolphin Tale 2 starring Harry Connick Jr., Ashley Judd, Nathan Gamble, Kris Kristofferson, Morgan Freeman, Cozi Zuehlsdorff, Austin Stowell, Bethany Hamilton, and more. Dolphin Tale 2 continues the story of the brave dolphin Winter whose miraculous rescue and rehabilitation- thanks to the invention of a groundbreaking prosthetic tale- made her a symbol of perseverance to people around the world and inspired the 2011 hit Dolphin Tale. 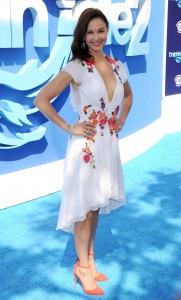 Director Charles Matin Smith and the entire cast has been reunited for this real life sequel.  The film begins with the loss of Panama, Winter’s surrogate mother, which leaves Winter grieving and unwilling to engage. The USBA warns that Winter will have to be moved from the aquarium because government regulations require these social creatures to be paired. If they don’t find a female companion for her- one that Winter accepts- the Clearwater Marine Aquarium will lose their beloved Winter after all they’ve been through together. But just as time runs out, there is Hope.

Watch what the cast had to say about filming and what to expect from this film!