Patrika Darbo, 2016 Primetime Emmy Winner has been a regular at the event: “Doris Bergman does one of the best events around.  Look at everyone and all the things that are going on here.  I just love every minute of it.” 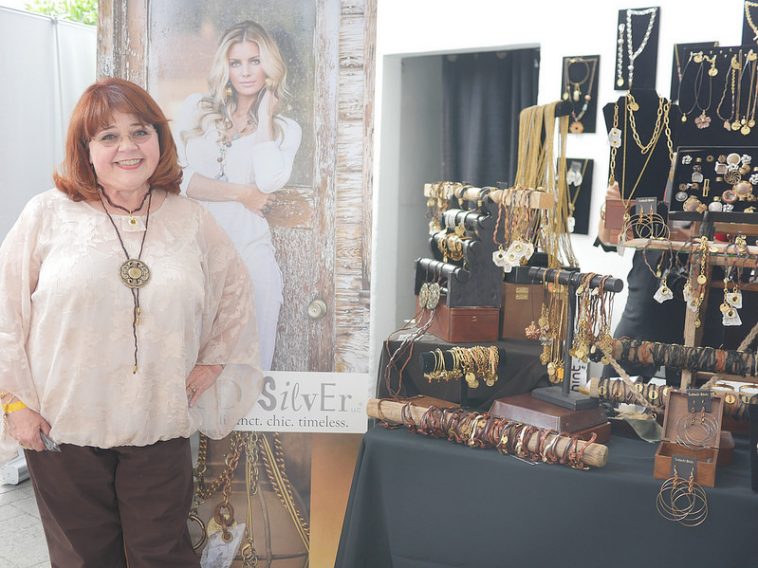 Kelsey Scott, 2017 Nominee for Best Actress in a Short Form Comedy or Drama Series for her role in the horror series “Fear The Walking Dead: Passage” commented, “I am a regular at Doris Bergman’s event.  We have a great relationship for years, and I am delighted that she kept inviting me back.  It’s always a beautiful event.  Doris does a wonderful job of bringing together people and different and new products “.  Scott also shared with PressPassLA her excitement about her Emmy nomination “It feels incredible.  It feels like nothing that you can explain but it’s a great sense of validation and honor.  I never expected anything like that; I mean I am thrilled about it but no expectation.  I hope that the work will be recognized.”  Scott went on to share her experience on how to stay focus in her career: “The most challenging aspect of the career is staying in the game.  It’s a career about longevity, you want your career to go as many years as possible, it’s about staying focus and faithful when it’s not as abundant and keeping your eyes on the prize.  There is more than one occasion that I thought about giving up but then at the end of the day, you just have to refocus.  You speak to the people important to you and listen to their advice then you make your decision.  My decision was always to get back up and keep going.  I am very close with my family and I have a small circle of close friends that I would walk into the traffic for if need be.  Those are the people that I talked to for advice.” 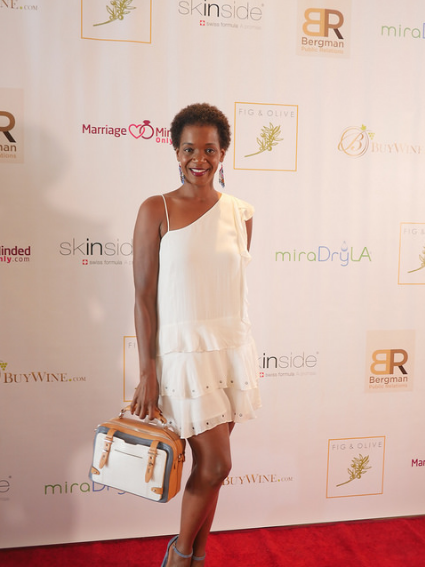 Gleb Savchenko from “Dancing with the Stars” said “I have been here (at Doris Bergman’s event) a few times before and I love it.  It’s always gorgeous, such a beautiful venue and such a fun place to come and hang out with people and have fun.”  Savchenko also shared with us the story of how an innocent elementary school crush led him to a career in dancing, “I was 7 years old and there was a girl in my class that I really liked.  I wanted to talk to her more and I found out that she signed up for a dance class so I went home and begged my grandmother to sign me up.  It’s a funny story. She is probably not dancing anymore but by the time I was 13, I knew that dancing would be my career.  I am so grateful to be a part of the industry.”

Naomi Grossman from “American Horror Story” just came back from shooting a vampire romantic comedy in New York: “I have been to Doris’ event every year and it’s always a good time.”  Grossman also shared her passion for acting, “I went a long time without having mainstream success but there is nothing else I wanted to do.  I knew I wanted to be an actor the moment I was conceived.  I just love character work and a good story that I can sink my teeth into.”

Also at the event was Jason Drunker, the 11-year-old lead actor from “Diary of a Wimpy Kid: The Long Haul”, “Right now I am working on the next Transformer movie, I can’t tell you much about it but it’s going to be an insane movie.  The challenging part is to juggle between filming and getting my school work done.”

The event also features an array of luxury fashion, accessories, and services.  The critically acclaimed fashion designer Sue Wong was also attending and showcasing some of her exquisite dresses: “I love Doris Bergman.  She’s just a fabulous personality, very flamboyant, really intelligent.  She’s my good friend and I really think that this is one of the classiest, if not the classiest, gifting suite in all of the Hollywood.   I do this twice a year with her, for the Emmy and for the Academy Award.”  Commented about her philosophy, Wong said “Beauty has the power to transform because it is the manifestation of our creative essence, a signature from our higher selves.  My clothes are all about the old Hollywood glamour and it really suits Hollywood to the “T” because it’s really about the golden age of Hollywood, the 1920s, the 1930s and the 1940s.  So everything I do is very glamorous.  It is in honor of feminine beauty and I really love what I do.” 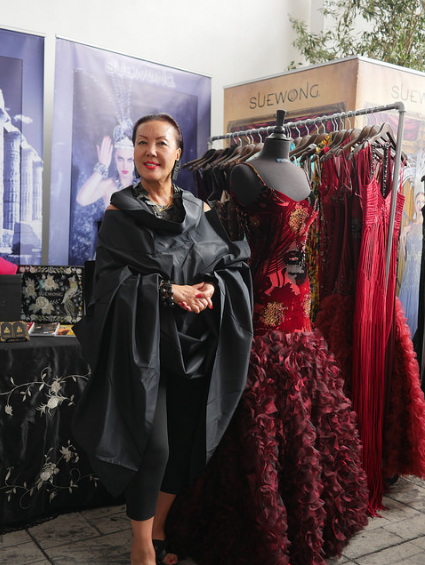 Ma Cherie Boutique, a silversmith in San Diego, was also there showcasing their prosperity rings, a delicate and elegant handmade design.

Hint, a new beverage company, was there to introduce a range of water that is free of sugar and sweetener but infused with fruits, such as pineapple, watermelon or blackberry.  Patrika Dabbo commented, “I try to drink a lot of water, and Hint gives me a little something more than just water.  That quenches my thirst and doesn’t load up the calories”.

A dynamic brand, Abingdon Co., was also at the event: “Our watches are for bad-ass women.  Our founder, Chelsea “Abingdon” Welch, is a pilot and she created a watch to suit her adventurous and jet-set lifestyle.  Less than 5% of pilots are women.  Part of the proceeds goes to a scholarship that sponsors women who want to become pilots.”  The last scholarship winner that Abingdon Co. sponsored was Audrey Swatson, a 20 years old student from Ghana who is studying to become a commercial pilot in Africa.

Amongst all the luxury was the spirit of giving back! Wednesday’s Child, the event’s official charity, was on hand collecting new, unwrapped gifts – clothing, accessories, electronics, sporting equipment, monetary donations, and more for their pre-holiday drive. All attendees are requested to donate.

Doris Bergman once again lived up to her reputation and delivered a spectacular soiree that not only featured the best of the best but also their generosity in bringing gifts and monetary donations to help foster children.