DR. DOG AND HANNI EL KHATIB AT THE WILTERN

Press Pass LA was at The Wiltern this past Thursday night to see Dr. Dog with opening act Hanni El Khatib take the stage for their tour featuring music off their latest album Be the Void released February 7th. 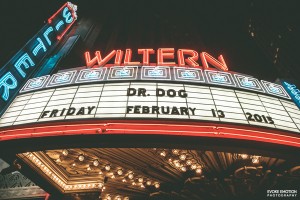 Then Dr. Dog stepped onto the stage accompanied, over the house speakers, by a chorus of harmonizing vocals heralding the six-piece forward to their eager audience; alight with anticipation. The stage was set with an ornately colorful display of decoration; an office plant cozying up next to an amp, a string of brightly-lit multi-colored spheres hanging high above the band.

“Band” accurately defines this group of musicians; a band of talented individuals whose cooperative artistry equates to a catalogue of tunes which collects nostalgia on the mind like wax in the ears. The band’s opening numbers at The Wiltern were pulled from their two most recent studio efforts; B-Room’s “Distant Light” was followed by Be the Void’s “Over Here, Over There.” 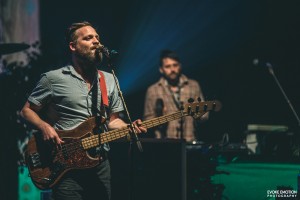 A trio of tracks from fan-favorite “Fate” propelled the performers and the packed room into an energized frenzy of dancing and head-tossing. If the songs that the band has written are the tracks on which the Dr. Dog train chugs along, then the locomotive that pushes and pulls at their momentum is Eric Slick on the drum set.

Slick is a heart, pumping an ever steady drive to push the beat or to lay into the space within a groove. Continuously surveying the stage with communicative eyes whose falcon-like focus conveys the ease of cooperative control shared onstage. This alchemy of musical personalities explodes into a captivating live performance. The three and four-part vocal harmonies that are signature to their sound and which hearken back to 60’s rock layering were uplifting, fulfilling even. 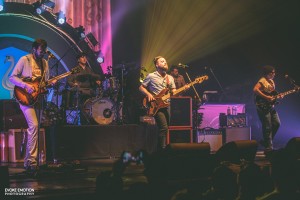 Dr. Dog is on a roll and reeling from their latest release “Live at a Flamingo Hotel”, a compilation of 19 live performances featuring songs spanning six of their albums as far back as Toothbrush’s “Say Ahhh” from the band’s 2002 debut album.

To see them on their next tour stop, visit DrDogMusic.com