DWTS IS BACK: ALL-STAR STYLE 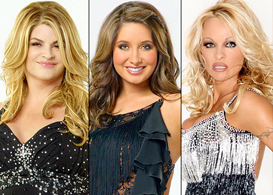 Mickey Mouse overheard that the great and powerful RuPaul was doing an All-Star season and decided to run with the dollar signs to the top of the fall lineup with the idea first. Thirteen previous contestants returned to “get that check” and possibly get a job again after the circus unhitches it’s wagon before the Winter holidays begin. Since it is an All-Star season, the margin for error is almost transparent and the judges aren’t holding back, which I love!

No sugar coating this time around because this isn’t their first time at the rodeo! Bruno put on his Elizabeth Taylor ring (these have always brought me luck) to show them his pimp hand would be strong, so get ready for the slap if you miss a step. Let’s start the show…..

First up was Joey Fatone (cha cha): Clearly, he got the call to appear on the show during his night shift at the bakery. Eating good in the neighborhood! He gets a point from me for opening with a Michael Jackson song, however he loses a point for looking like he needed mouth-to-mouth by the end of his routine. The potential is there, though. He needs to get back to par with his former dancer within. 20.5

Shawn Johnson (fox trot): Everyone’s favorite Chippette is back and just as smiley. Her opening dance was solid, but I am surprised by the lack of pizazz. I know this is week one, but these are veterans. 22

Sabrina Bryan (cha cha): Yes, she beat out my Carson in the votes, but I am not throwing shade because I feel she should have been in the original cast! Carson, Kyle Massey, and Sabrina had to vie for votes when they were clear fan favorites during their seasons. Some of this cast is LAME (exhibit A: Bristol Palin)! I digress…back to Sabrina. She has grown into a sexy woman with a great pair of legs. Maybe I am a little partial because she was in the Cheetah Girls with my twin flame, Raven Symone. And maybe I am a bit partial because she’s a fly sister with curves (high five from the club). All together, she can dance. The only thing that bothered me was that permanent wedgie through the entire dance! Double sided tape can be used for both sets of cakes, my dear! 22.5

Helio Castronoves (fox trot): This man is still super animated. I thought I was watching The Mask with a low budget Jim Carrey! I couldn’t pay attention to his dancing because of that rubber face. Judges gave him a 21.5

*I forgot to mention, the judges now the have the half point option to separate the pack or add suspense…Dun, Dun, DUN!!!*

Pamela Anderson (cha cha): This chick came out looking like she just got off the set from her starring role in “Showgirls: Whatever Happened to Nomi Malone?” Hot. Damn. Mess. They only brought her back to gain viewers amongst straight men who pray for a wardrobe malfunction. She’s still got sex appeal, but she can not dance! However, please vote for her because the tea party is by their phones to keep Wasilla’s pride and joy in the front row (Sarah Palin sighting) in this election year. 17

Melissa Rycroft (fox trot): Remind me who this is again? Tell me how she beat out Carson Kressley in the cast? Are you really asking if I’m still bitter? See my eyes…Roll ’em! She did a good job, but she better because she has no other job! 21

Apolo Ono (cha cha): It’s been how many seasons since he won and he still hasn’t shaved that hideous flavor savor on his face? I can’t! Ugh! Here’s his score. 22

Bristol Palin (cha cha): Um….”Harpo, who dis woman?!” Did she go to the doctor and ask for the Demi Moore special? New face, new body, new weave! I didn’t recognize her! Too bad she didn’t finish the transformation and watch a copy of Striptease to learn some moves because she was stiff as a board. 19.5

Drew Lachey (fox trot): He came out looking like a miniature man in a super starched suit. I have absolutely no idea what he’s been doing all this time, but you could tell when the cash for gold number was replaced on his caller i.d. with DWTS, he sprung into action back in the dance studio. One of the better performers of the night. 21.5

Kelly Monaco (cha cha): She was the very first winner of Dancing With The Stars, so all eyes are on her. When the show first began it was only six weeks long, but once ABC learned how to get blood from a turnip, they super sized it like everything else in America. She has been out of the game the longest and doesn’t even know half of the dances. I am rooting for her on that principle alone. She exceeded everyone’s expectations and gave her a young partner a permanent boner in the process. 21.5

Kirstie Alley (fox trot): She’s back and has kept off the weight! She was teamed back up with Maksim, but this time he won’t need a back brace (maybe just an icy hot patch, she’s not THAT small). She’s always a crowd pleaser who never fails to keep the fans on their feet. After her dance, she planted a long, wet kiss on host Tom Bergeron to congratulate him on his Emmy. For some reason I would think a kiss from Kirstie would taste like Cool Ranch Doritos. 19

Last, but not least, My Favorite this season EMMITT SMITH (cha cha): Save the best for last! Former mirror ball winner, Superbowl MVP, Hall of Famer, Dallas Cowboy, G.O.A.T. “Twinkle Toes”….sorry, I went on a tangent there. Emmitt was dubbed the best of the night. I agree. He received the highest score. What do you expect? He’s a Dallas Cowboy! Emmitt Smith to Win and the Cowboys in the Superbowl! 24.5

There’s no bye week this season. Someone is going home after only one show. Tune in to ABC for results.