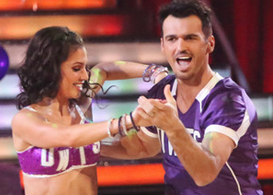 This week all the dances were performed to country music hits. I grew up in North Carolina, so this belle knows about all the wonderful things the South has given the world. Amazing food, beautiful landscapes, grand architecture, songs that express every emotion…I could go on, but I will stop right there if DWTS ever tries to choreograph a Paso Doble to Dolly Parton’s “9 to 5!”

Tonight’s celebs were also given the task of performing a 20 second solo within the routine. Spotlight! Cue the music!

Who decides the wardrobe choices for Gilles? I’m not a ballroom expert, but if I were performing a chacha, I wouldn’t be dressed like an extra from Right Said Fred “I’m Too Sexy..” music video! By the way he was flailing those arms and pouting those lips, if Hollywood decides to remake The Birdcage, look no further for your lead actor. 27.5

Sabrina’s rumba can only be described as a dance that was so perfect, it is usually reserved for the final dance of the evening. She may not realize how many male fans she has, though. The men I know (the few straight men I know) describe her as “pretty in the face and thick in the waist!” PERFECT 30 Go on, girl!

Kelly’s tango was good but not great. I think her dress swallowed her up and distracted you from her performance. She may be in jeopardy tonight. 27

Melissa’s Viennese Waltz was technically proficient, and the judges praised. However, I feel like when she tries to convey acting in her routine, she over acts. There are plenty of classes in this town she can take to help her dull ass out. I know she’s got 50 bucks to spare. 29

Kudos to Shawn Johnson for actually putting some country dance moves into her routine on a country themed night! Does anyone else see a beautiful woman emerging before our eyes? Len is way too critical on her. He needs to stop underscoring her. What does he want her to do? Spin on her head! 28

Kirstie Alley was not looking like a 60 year old woman during her rumba! Her spanx were working overtime to give her the silhouette of a coca-cola bottle. Maybe I need to run down to her Organic Liaison business office and drink the kool aid myself. Everyone took notice of her new shape and better dance moves. Sign me up! 27.5

Apolo Ono works very hard each week to entice the audience with a mesmerizing performance. His Viennese Waltz was light and airy. Now, if he would only let his razor work as hard and shave those pubes growing under his bottom lip. Does he realize he has the potential to be a babe magnet? 30

Emmit Smith is the new America’s sweetheart. His smile is infectious. He makes his routines a party that everyone is invited to. He’s definitely a fan favorite. 26.5

The couple’s did a group dance that looked like a group free for all! The agenda was clear: try to break your partner’s neck for two extra points. It was pandemonium! Kirstie and Maks got the extra points for looking like they were having fun and not trying to be rolled into intensive care.

I think Melissa and Kelly will be under the red light tonight, but it’s anybody’s game!